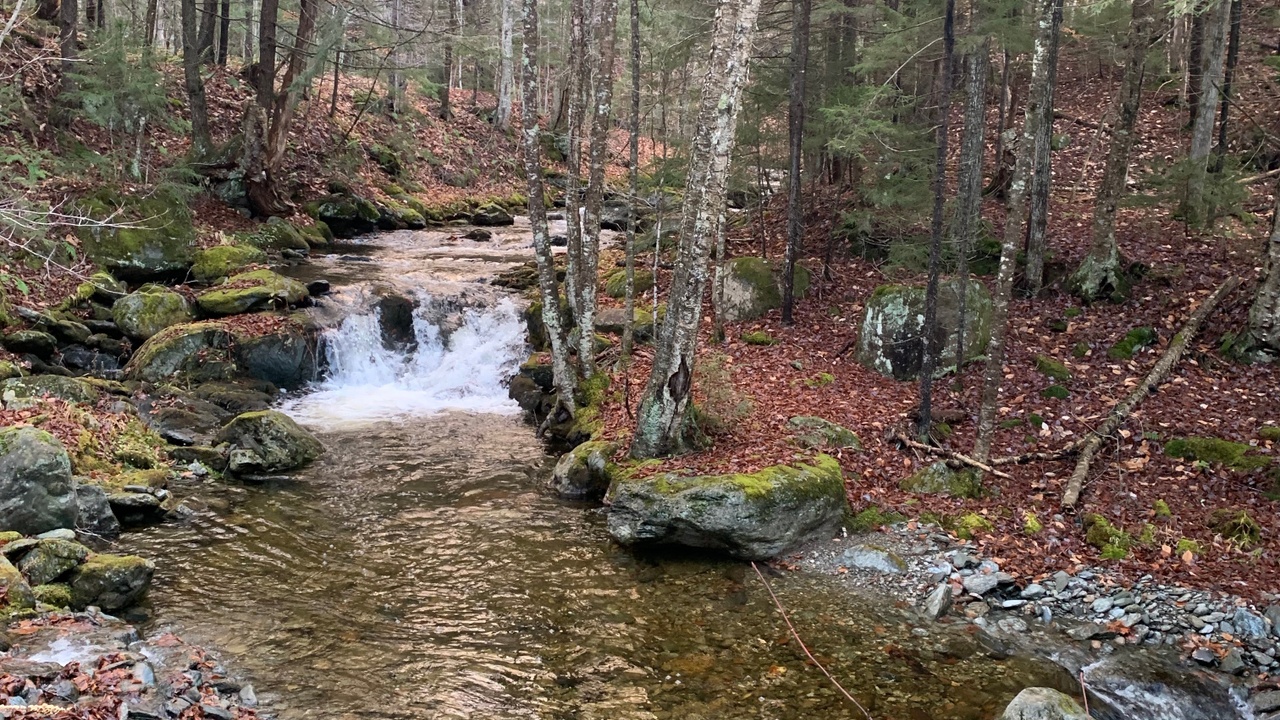 Today I was walking out into the woods by 6am, sneaking quietly through some feeding areas by First Legal Shot time.  The rain had frozen into a crusty semi-snow-coating overnight, and I could see that the deer hadn't been in the field, but a bear had been there! 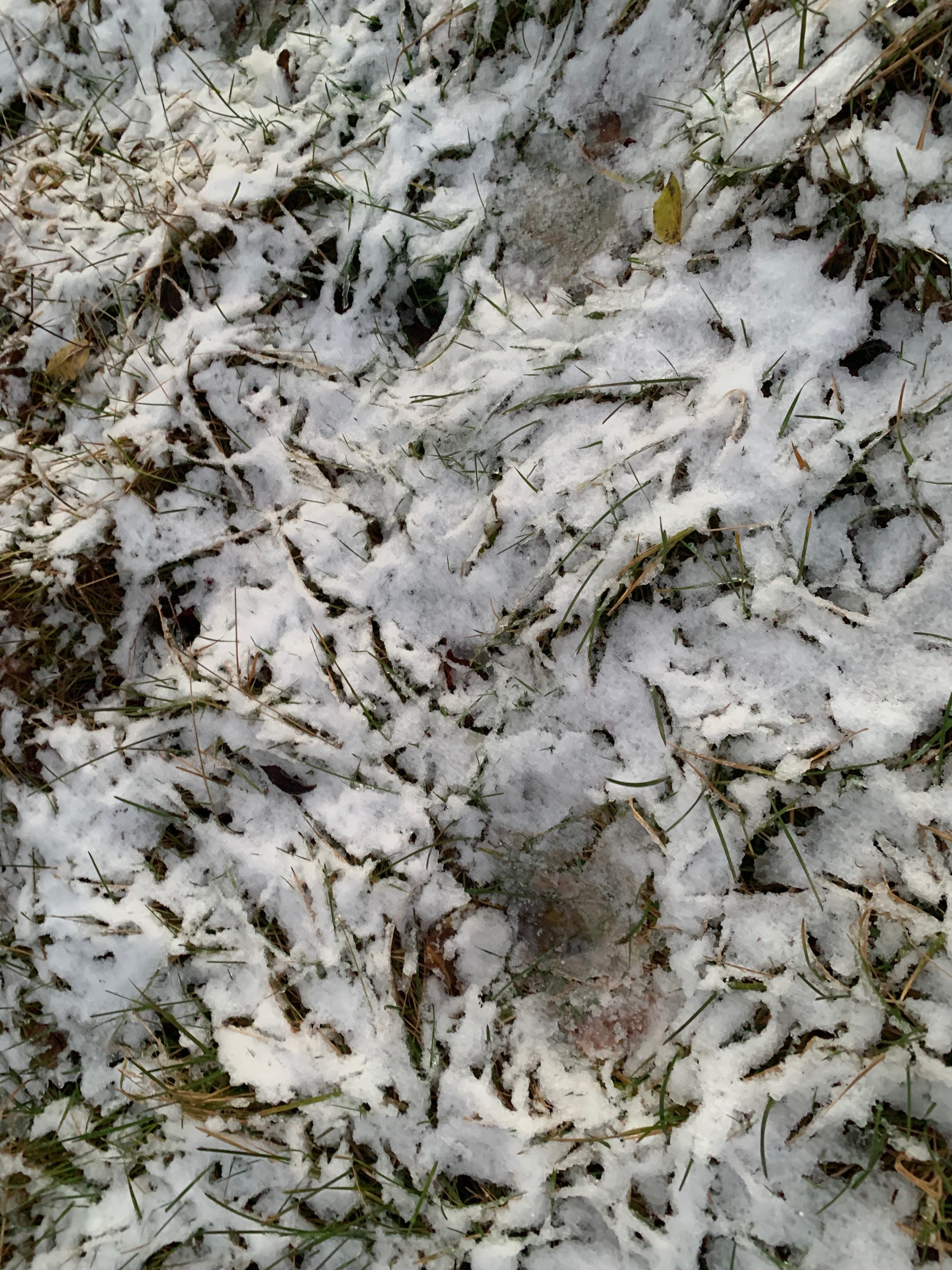 Bear tracks in the snow

I have seen signs of this bear all fall, they clearly love the apples here just as much as the deer do (and leave big apple-saucy turds to prove it).  I am not intentionally hunting bear right now, but in Vermont the first nine days of rifle season (for deer) overlap with the last nine days of bear season, so they are legal to harvest until next Sunday.  Ever since the local bear has started terrorizing local trash cans and chicken coops this past summer, I've pondered the ethics of a bear hunt a little more seriously.  Both Worcester specifically and Vermont in general are very flush with bears, exceeding the state's population goal in many years.  I decided I wouldn't go after the bear, but if they walk in front of me broadside and present a perfect shot (which has happened to me before), I would accept the offering.  A bear would fill the freezer just as well as a deer, and bear fat is a divine food.

After seeing the bear tracks, every dark object in the forest began to look like a bear!  Such are the pattern-recognition tricks of the human brain.  Pushing on, I came to the bottom of the trail to the Spruce Maze, but the East wind was all wrong for hunting there this morning.  Instead I explored another overgrown logging road that I've been curious about, and almost immediately I came across buck sign:  a fresh scrape! 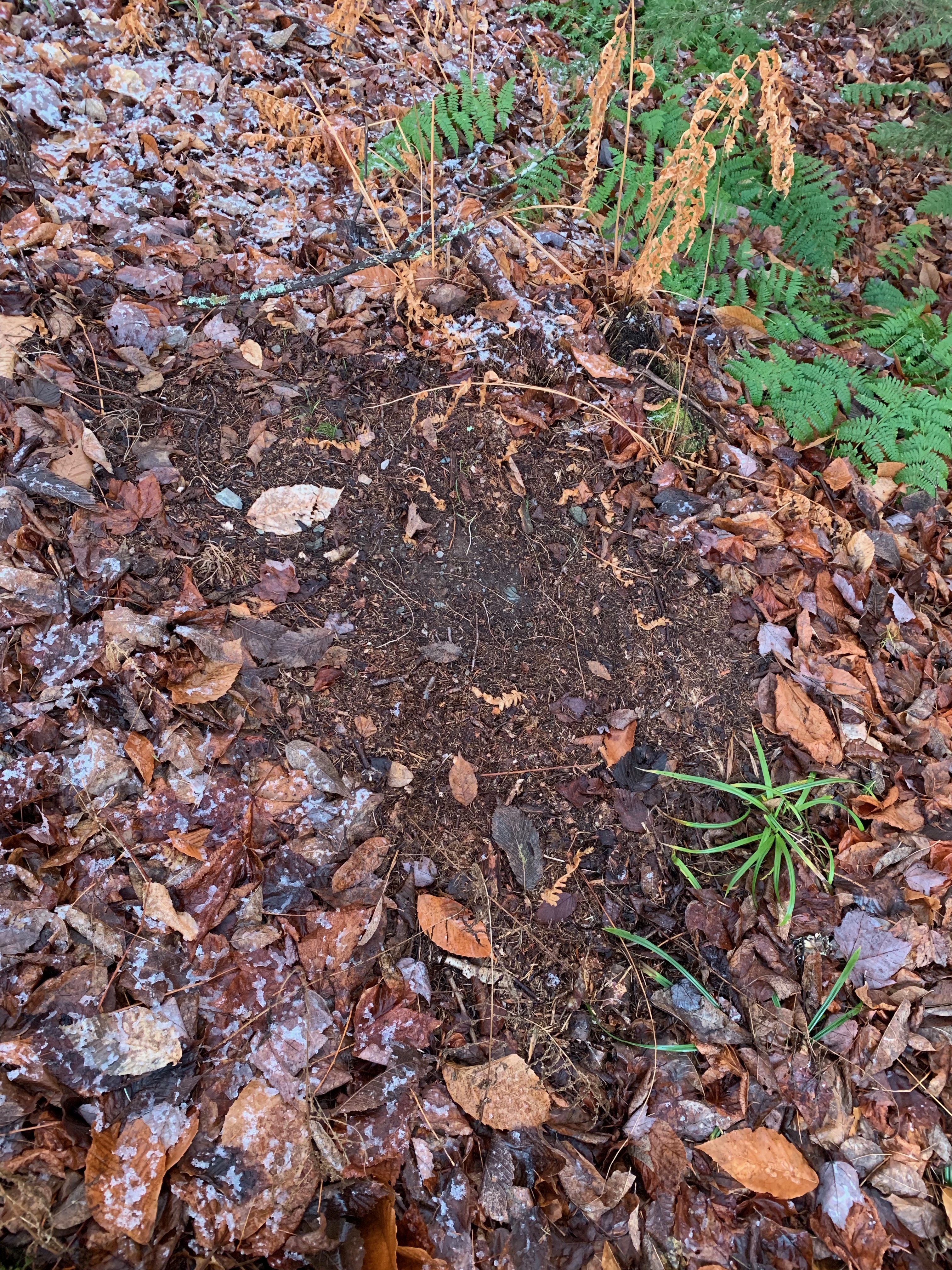 The first scrape of the day

A promising start!  I continued down this logging road, and soon came to the most lovely cascade and stream.  Worcester is so rich in swimming holes that after living here for nine years I am still discovering more.  I'll have to come back here in the summer. 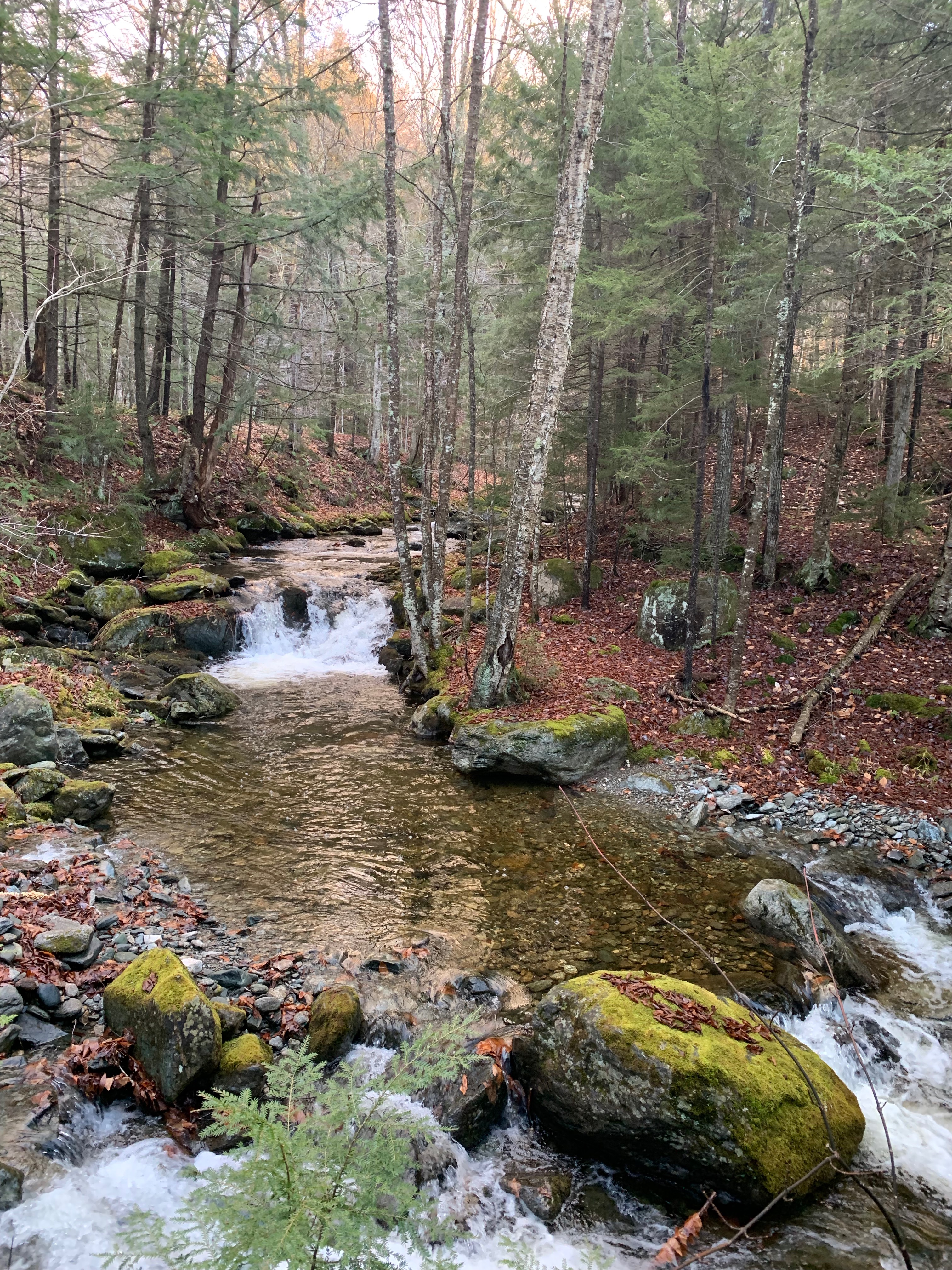 I continued along the logging road into a big bowl-shaped hollow full of beech trees. 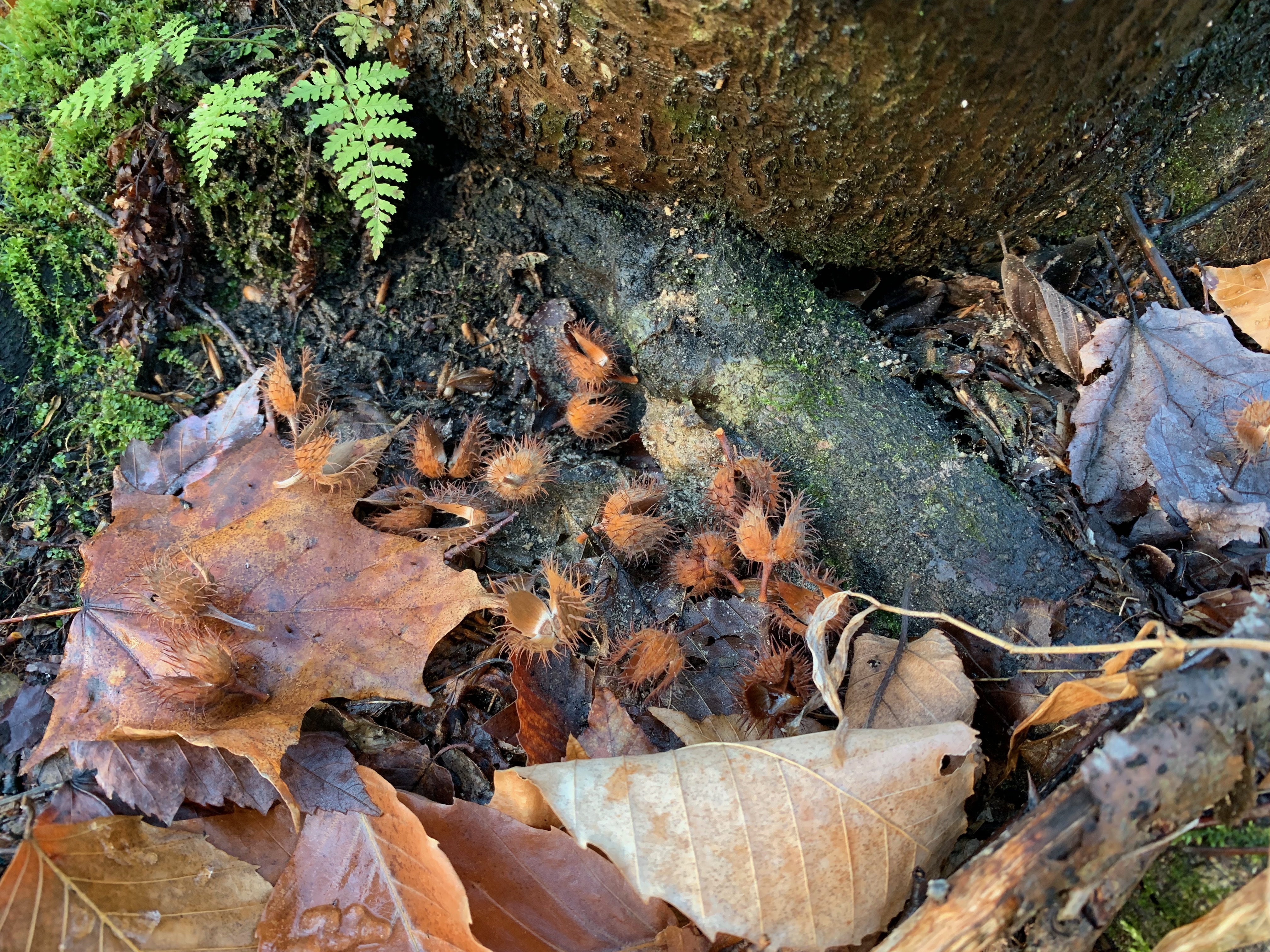 I found no less than five scrapes along this logging road and in the beech bowl, which I have now named "Scrapesville" in my head.  Wilderness navigation is very much enhanced by making up memorable names for the places you want to remember (seriously... this is related to the indigenous tradition of Songline Navigation, but that's another topic!).  I climbed up one of the little ridges on the west side of the bowl (so the east wind wouldn't blow my scent into the middle of things), put on my warm layers, and sat down for some watching & waiting time in the morning sun. 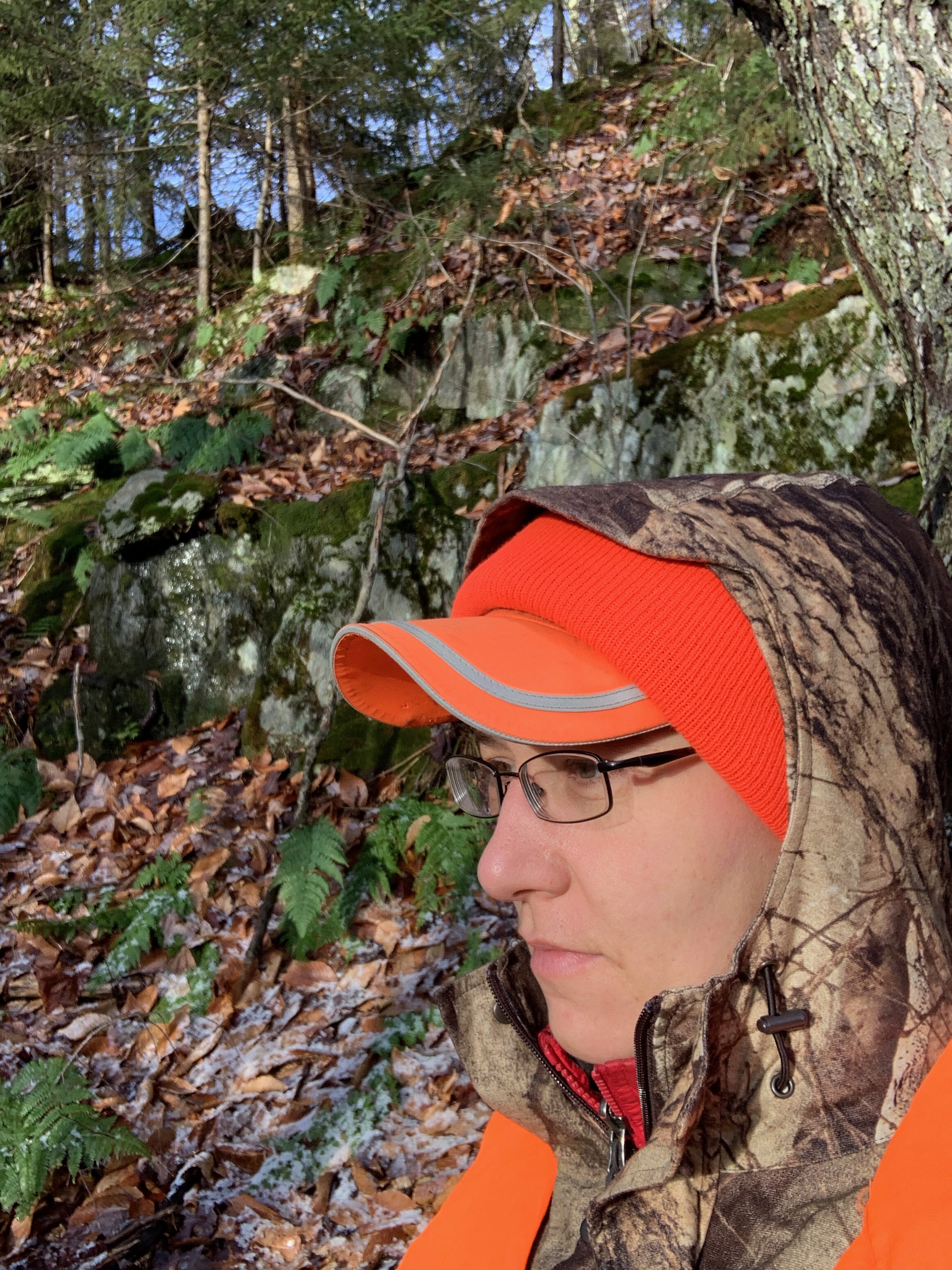 Basking in the November sun

Right after I sat down I saw a four-legged shape moving through the floor of the bowl... I only got two glimpses of it, but I'm pretty sure it was a coyote!  Very cool sighting.  I don't hunt coyotes, even though I know from my roadkill diet that their meat is really delicious.  I've read the state fur-bearer biologist's report on coyotes cover-to-cover, and I'm satisfied that there is no need to shoot coyotes that aren't actively preying on livestock.

After a good sit I walked out, and got home just after 10am to let the dog out.  Then came the important midday hunter's nap, followed by more reading from Asbell's book on still-hunting. 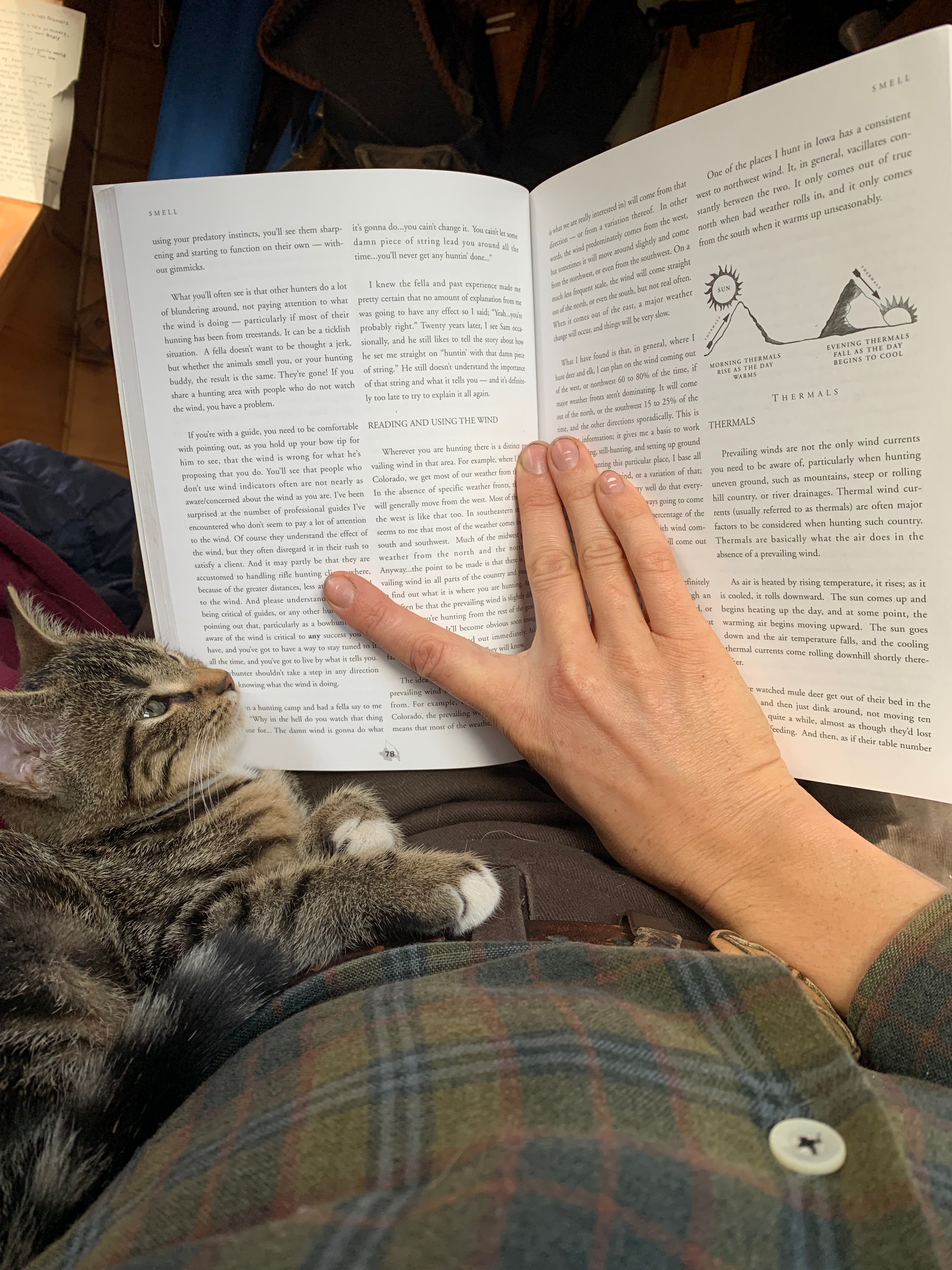 Penrose likes this book on still-hunting too!

In the afternoon I explored yet another logging road.  I suspected it would not have as much sign, since it goes up into a very open maple stand that isn't fantastic habitat, but I'd found so much great deer sign on either side of it that it seemed worth checking.  There were definitely recent deer tracks in the leaves, a bit of scat, and one solitary scrape.  But it had none of the density of sign or promising cover of the Spruce Maze or Scrapesville. 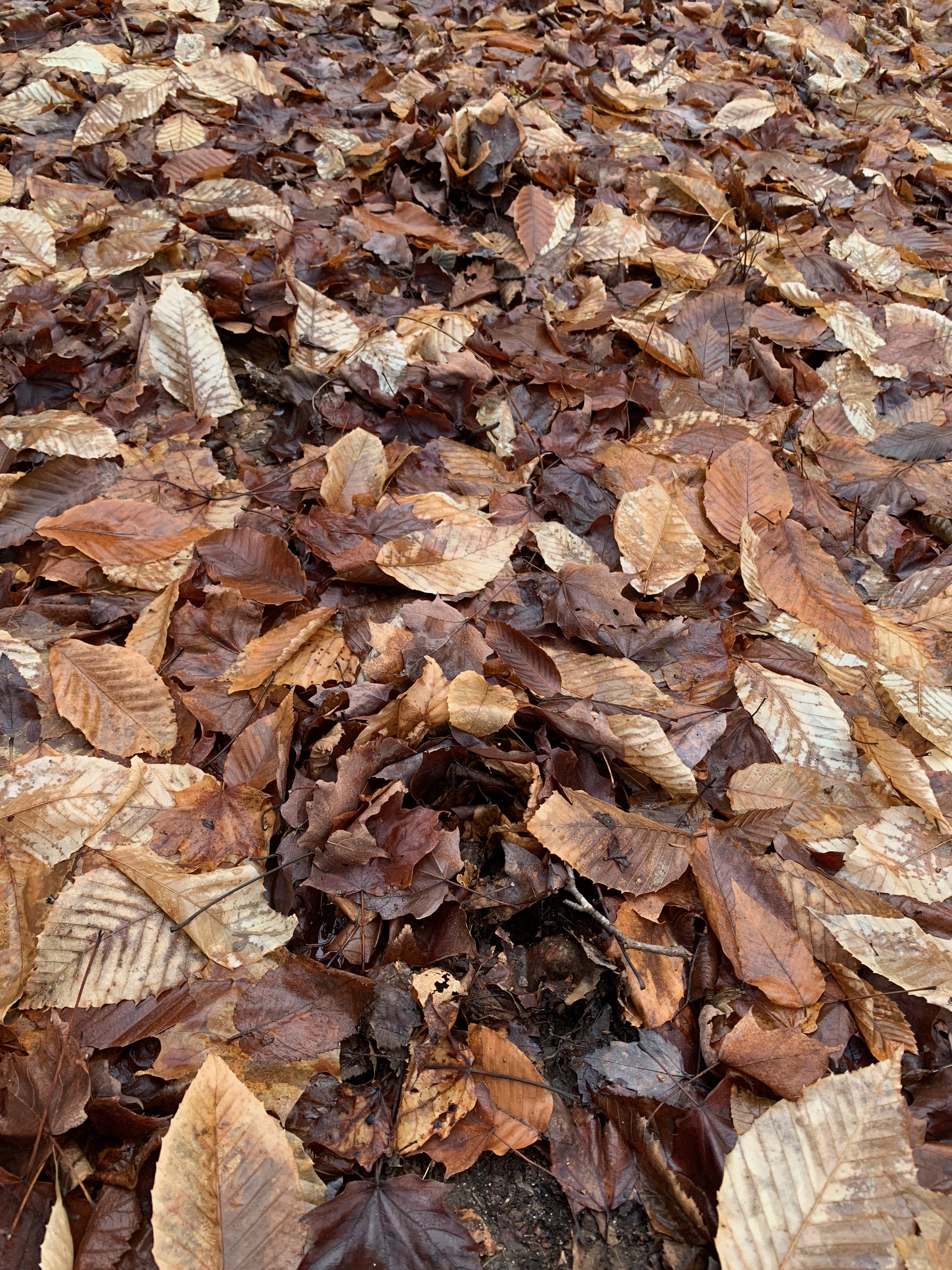 Can you see the three deer tracks in these leaves?

I sat up there for a while just the same, and slowly crept back after sunset, reaching the main trail right at Last Legal Shot time.  I used to never break my sit until Last Legal Shot had passed, but since I'm trying this sneaky still-hunting thing, it seems useful to be able to take a shot on the way back through if I'm sneaky enough to surprise a deer (which is questionable).  Plus then I don't have to hike out by headlamp, which is a real give-away to all the wildlife in the area that I am there.  I'm still not sure what the right choice is, it probably depends on the conditions that day.

I keep avoiding going to the super nice place where I have hunting access in East Calais, with a tree stand I set up near an orchard, because the new housesitter has a dog and I'm afraid that will have temporarily driven all the deer away.  I've seen a bunch of deer there, but I've yet to encounter a legal buck on that property, its an extra 30 minute drive away, and other hunters tend to stride through and ruin all my well-laid plans to ambush deer.

I'm really enjoying this new hunting ground I'm exploring, which is much closer, actually has a really impressive amount of buck sign, and I seem to be the only person hunting off the main trail.  In my pre-season walks there I have seen five deer (none with antlers), a black bear, and a healthy cow moose with a big gangly calf.

It seems like I am perpetually exploring a new hunting ground each season, which is not ideal -- in the "big woods" environment you want to learn your hunting grounds intimately over many years if you hope to have success.  But hunting in this area is making my heart happy, and I'm going to keep exploring it for a while.  It feels right.  Maybe it will become my primary spot that I learn over many years, or maybe I'll take what I learn here to another spot next year... time will tell.