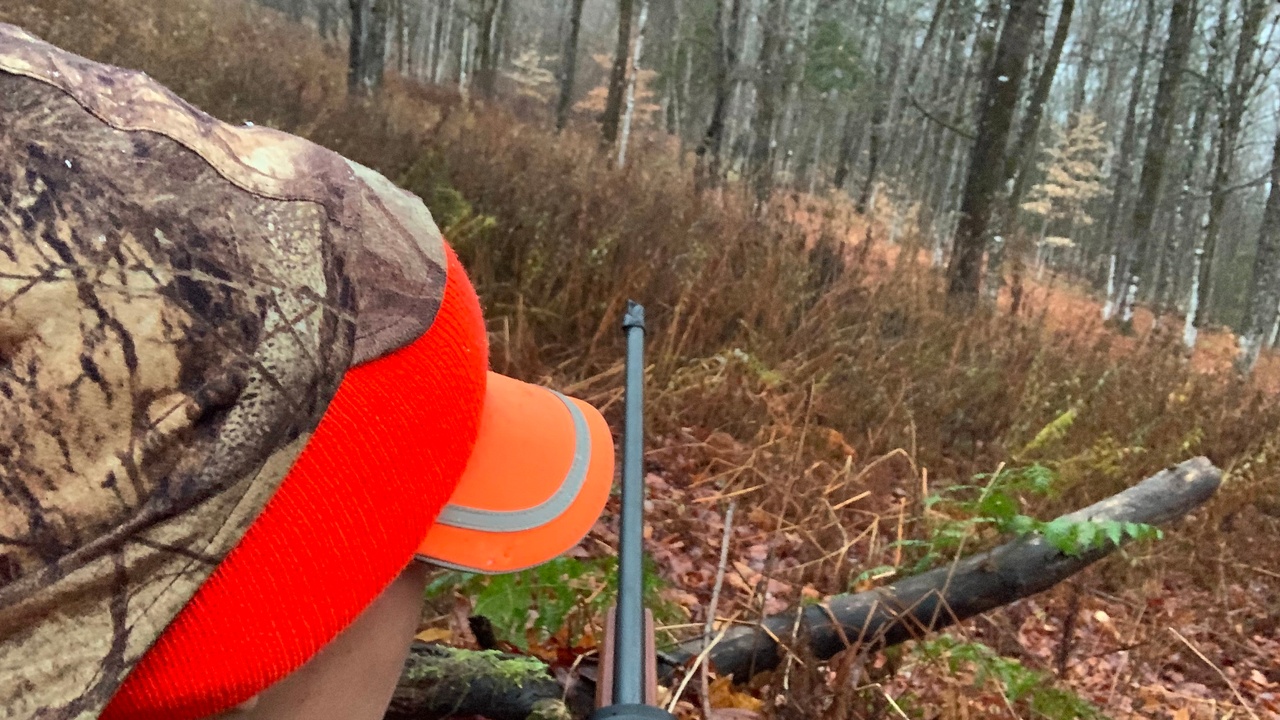 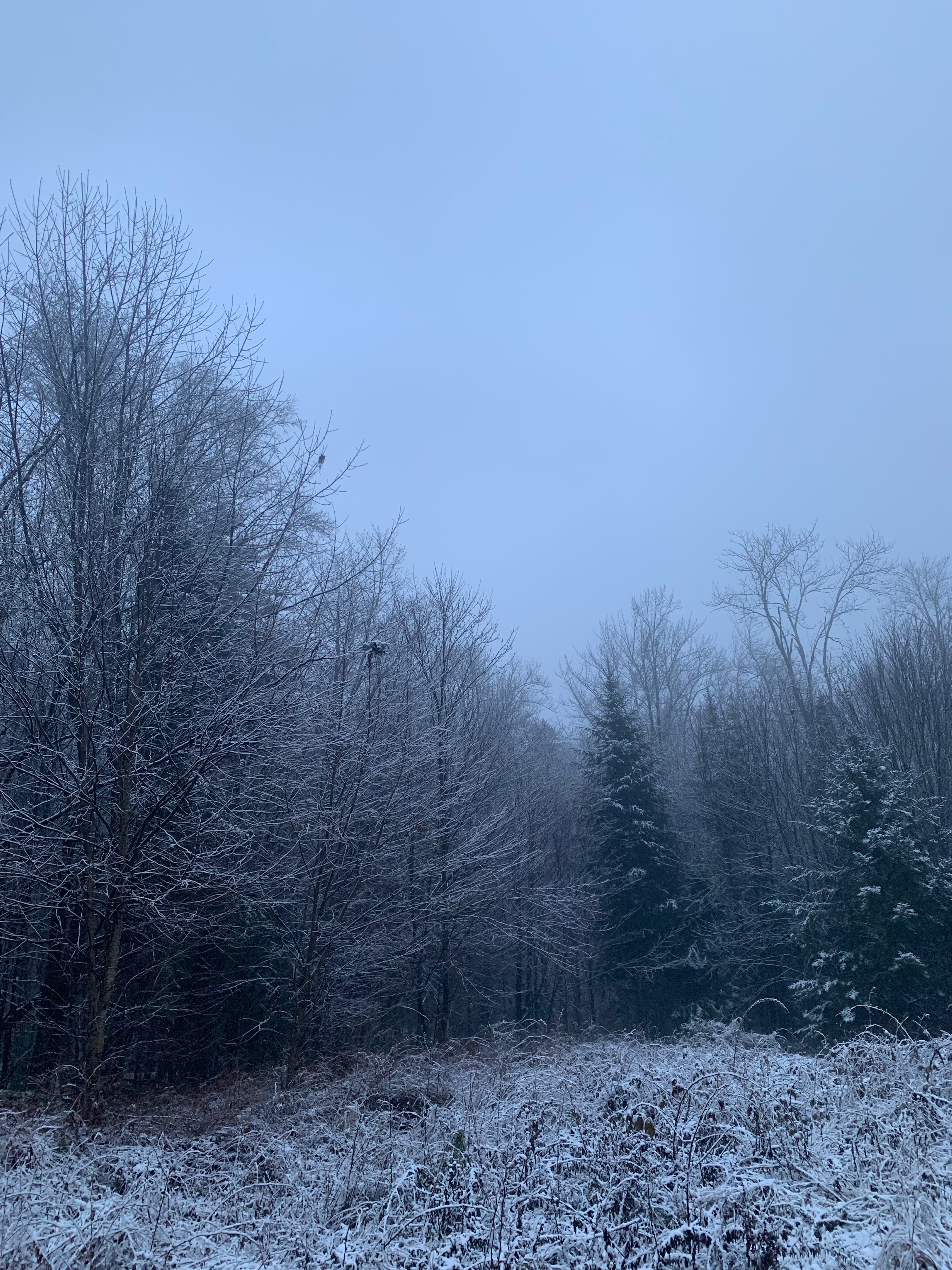 This morning it was magical and misty-cold, with frozen rain-snow on everything.  I crept in and took a cross-country route towards Scrapesville's western rim.  Soon I came across a fresh deer path that looked like it had probably been walked on some time since midnight, because the rain-snow crust had not settled on the disturbed leaves like it had on everything else.  Sometimes snow doesn't stick on paths simply because the compressed leaf litter is closer to the warm earth so the snow melts.  But this looked fresh. 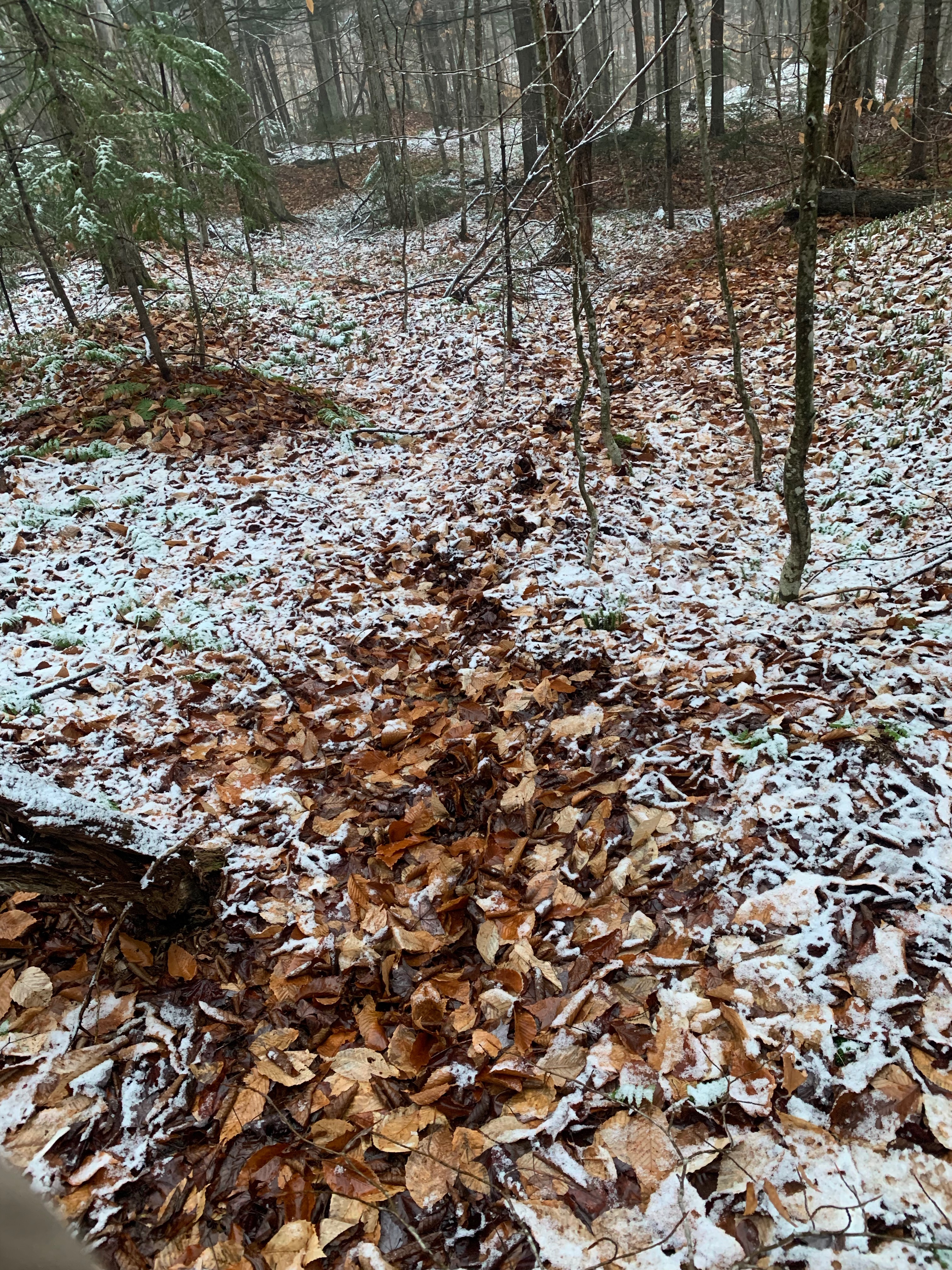 I found a place to sit in a little hemlock grove above the path, figuring that if the deer who passed had been does (which is statistically more likely), they might well be in estrus, and all the bucks who frequent Scrapesville would smell their condition and be hot on their trail.  A deer coming through on this trail after sunrise would more-than-likely be a buck. 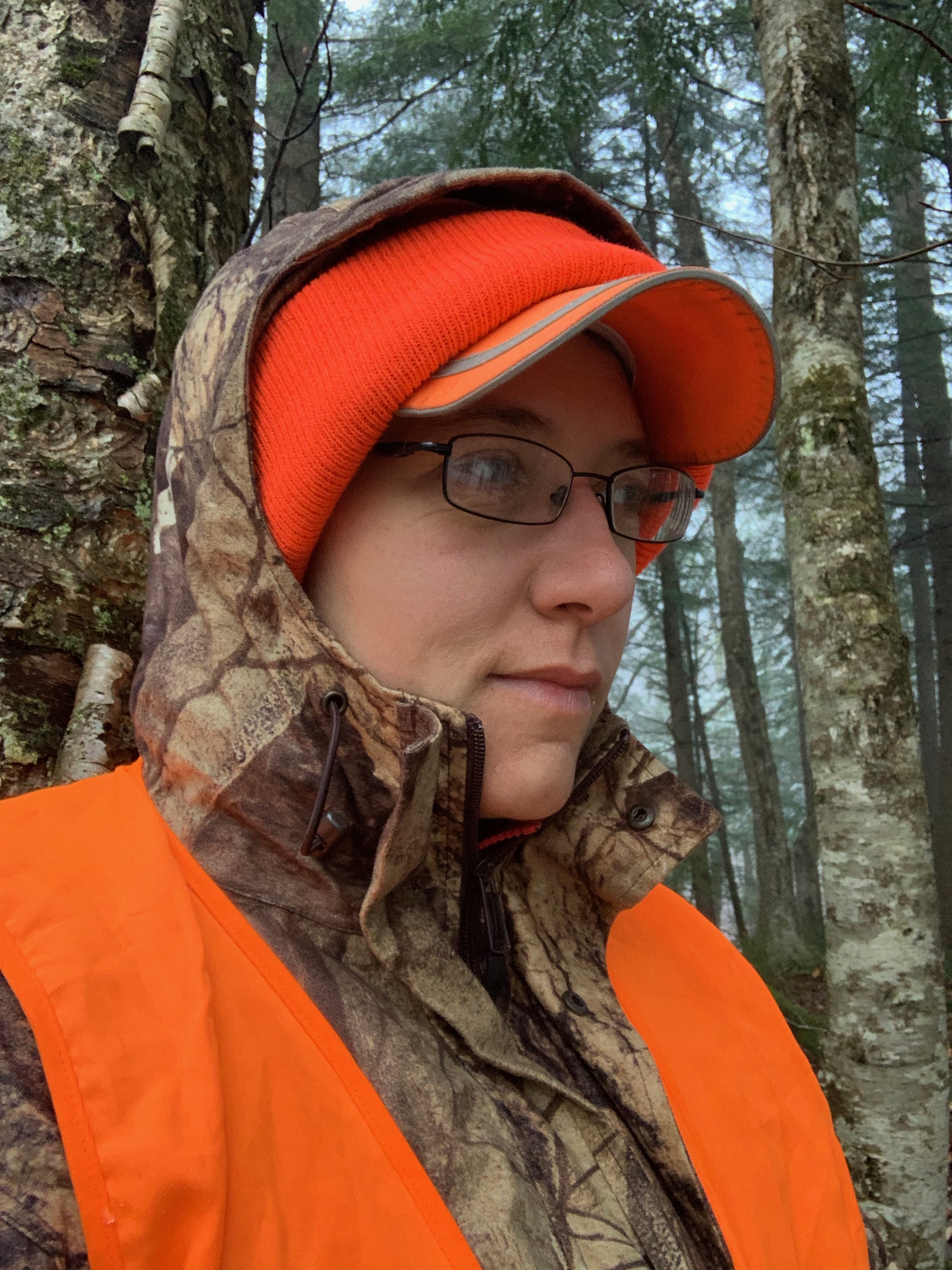 I did not see any deer during this sit, but a very cute little red squirrel checked me out and decided not to make and alarm call to tell the whole forest that a human is around.  I always find it flattering when they accept me this way, despite the fact that squirrels and birds (unlike deer) can see blaze orange just fine.

On my hike back out I realized there is a strange trail of orange flagging tape running through the woods near where I was.  It isn't a property boundary.  It looks at least one year old.  Was it put up by another hunter?  What does it lead to or signify?  Maybe I will follow it out further next time and find somebody's old treestand out there (or whatever it marks the path to).

On my way out I hiked down below two open fields that I usually pass above, to check out the downhill deer sign, which turned out to be abundant.  The first field had two well-used scrapes just below it. 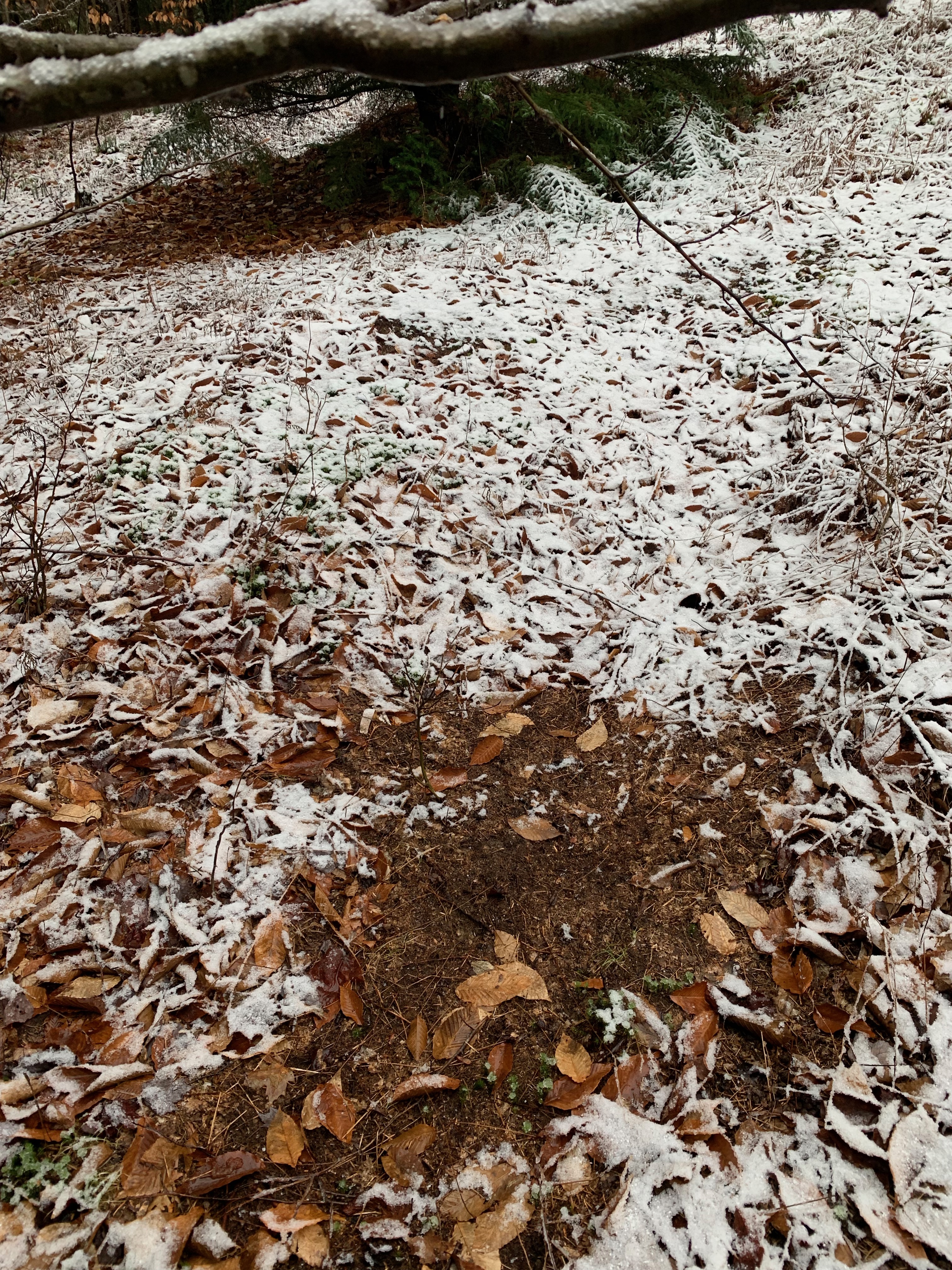 The second had many raspberry canes with deer-eaten leaves (in addition to the apples and acorns there), and since it was after 10am I ventured to swing through the lower corner of that field where someone had a treestand set up during archery season.  The tree stand was gone!  I think that means it is fair game for me to sit there, and it is a great spot near food that isn't very far from where I park.  Awesome! 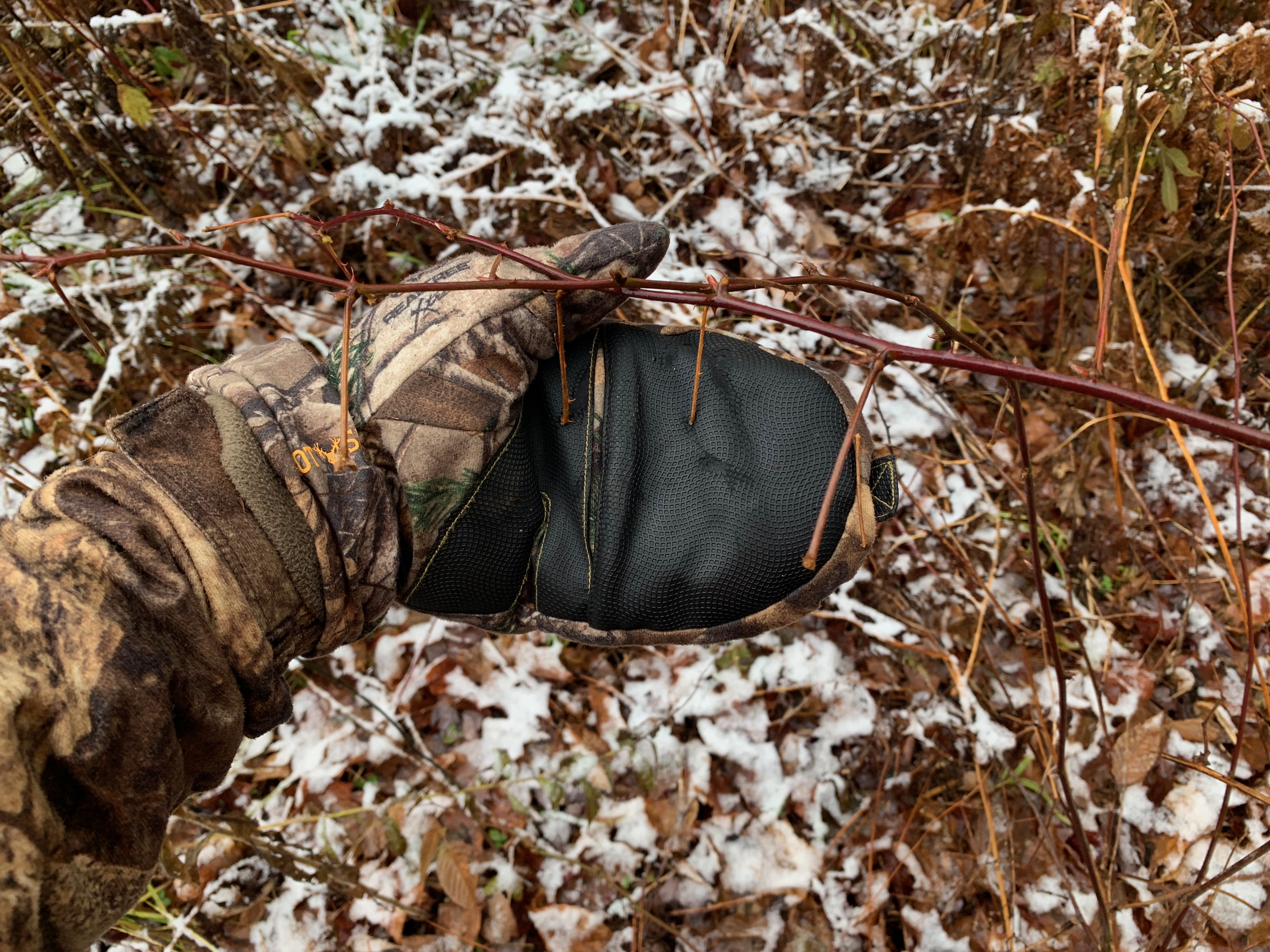 My midday Monday meetings went long (one involved an hour of unexpected chainsaw work!) so I headed out at 3:30pm and just sat by that lower field spot, a bit behind a stonewall with some large dead branches on it that forms a natural blind.  I did not see any deer, but it felt like an extremely plausible spot.  It felt worth sitting there all the way until Last Legal Shot, so that is what I did. 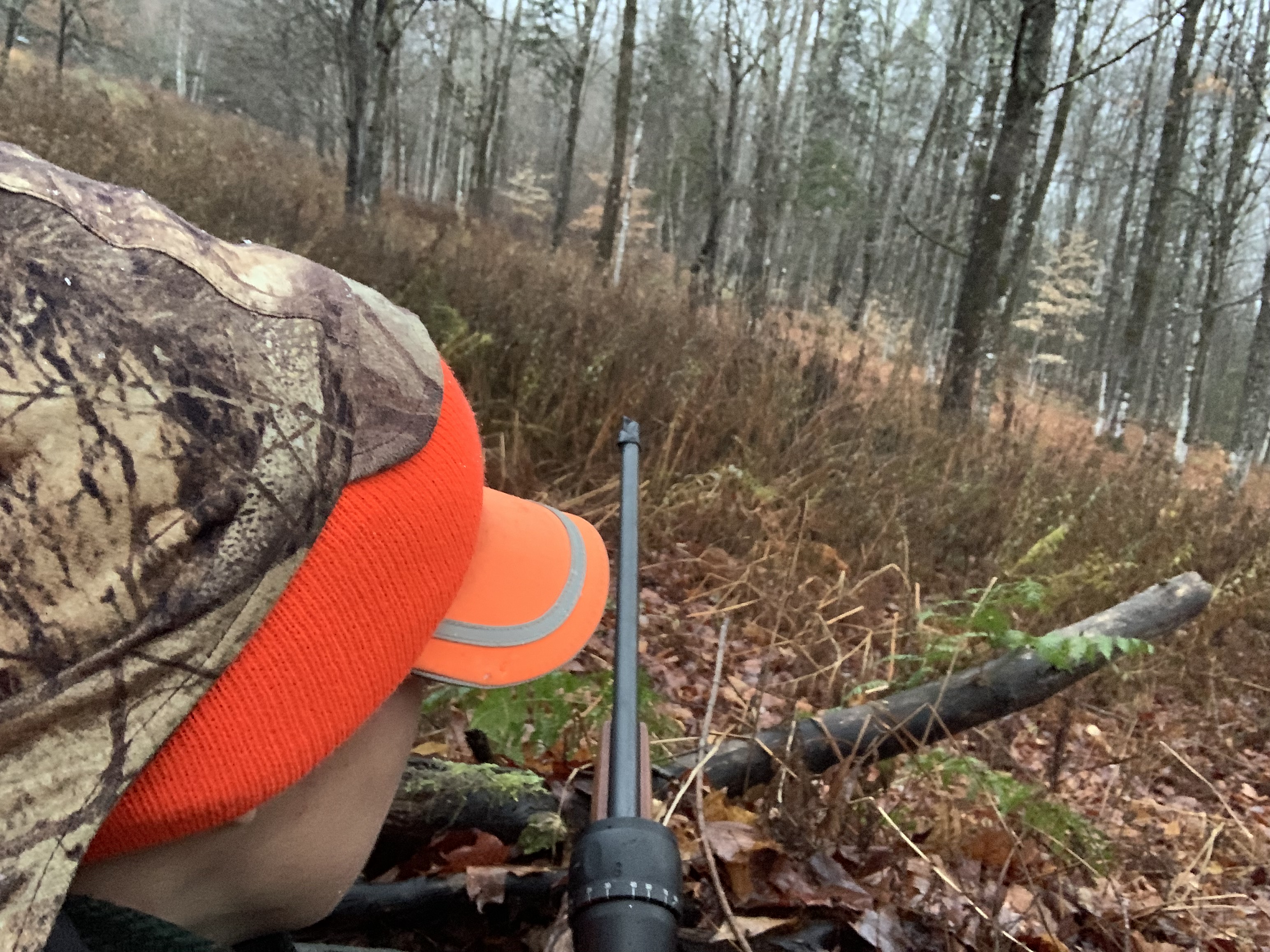 We are still getting this persistent east wind.  I'll have to rethink all my spots once the wind shifts.  I can't hunt for the next two days, but hopefully I will be out on Thursday (unless my covid booster shot lays me low for a while).

In other news, in response to getting fewer long walks in the woods this week, Clyde has made up a new job for himself:  he picks whole raw eggs (which had sat in the coop too long) out of the compost, carries them around in his mouth with great concern on his face (without cracking them), and finds little obscure corners to hide or bury them all around the homestead.  The first time I caught him at this, he was burying one in black coals in a corner of the firepit, and was so upset that I saw him doing this that he barked indignantly.  He LOVES this new job SO MUCH.  But I still feel guilty that he is getting fewer long walks!