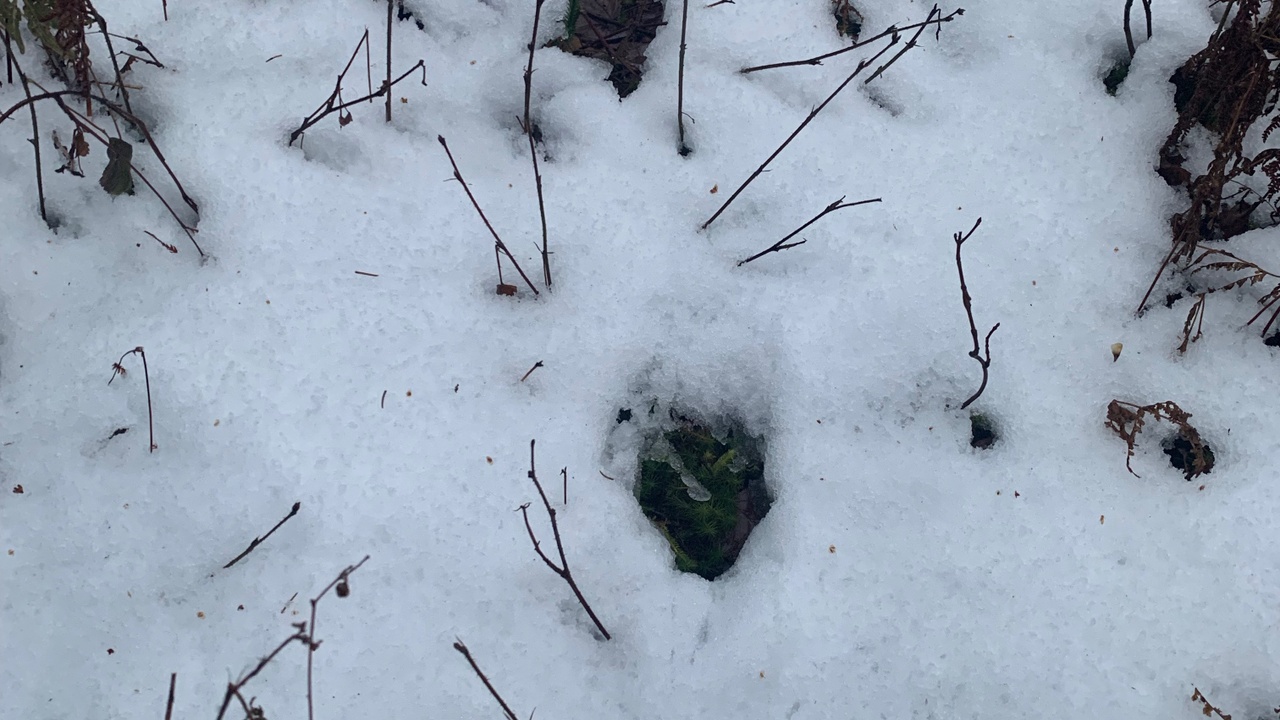 Tuesday would have been the really awesome hunting day this week, with enough fresh snow on the ground to really hold a good track.  But I had to work an 11-hour shift that day, so no hunting for me!  And Wednesday was consumed by pre-Thanksgiving necessities: car repairs, errands, and a covid booster shot.

This morning I felt okay besides a sore arm, but decided to let my body really focus on cranking out new antibodies in the morning (thanks, Moderna!) and lazed around napping and reading a book on upland hunting to learn about hunting grouse.  I was not that impressed with the book... like so many hunting books it doesn't actually explain the basics very well (if at all), and is mostly a litany of grumpy-old-man commentary instead of actionable information.  But I learned that my 20-gauge shotgun would work fine for grouse, I should buy size 7.5 or 6 shot and probably use an "improved cylinder" choke, and that grouse hang out in... well, all the places where I already tend to see them!  I don't know that Clyde will really make a great grouse dog, since he doesn't have much of a bird nose -- I typically see the grouse before he does!  But at least it will be legal to bring him along.

In the afternoon it started to rain.  I think this will definitely be the rainiest rifle season I have experienced in my eleven years as a hunter.  I decided to head back up to the spruce maze. 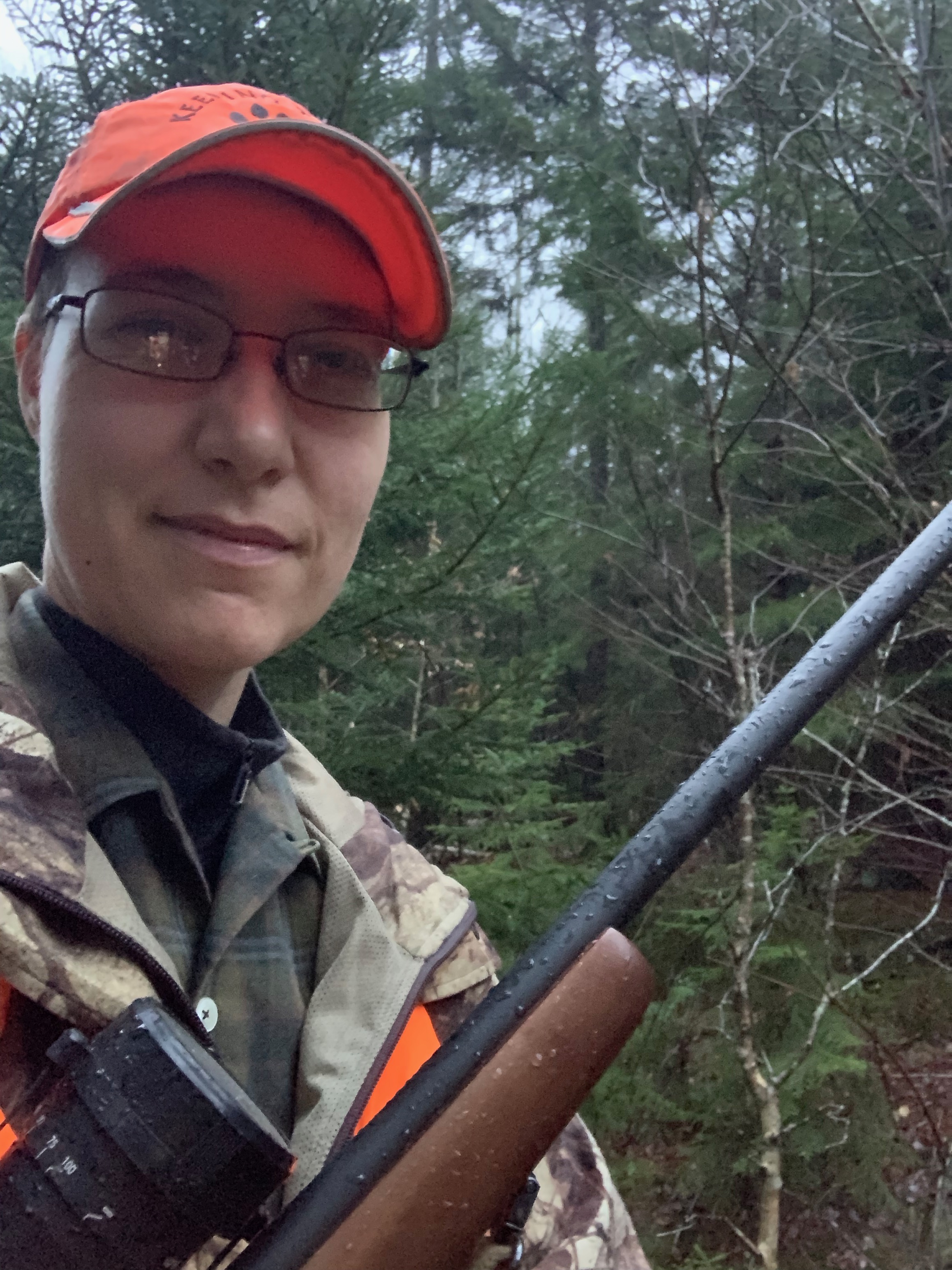 I didn't need to focus on being extra-stealthy, since the heavy rain was making plenty of noise to cover my footsteps.  About halfway up the trail, I froze -- up ahead a single branch near the ground was waving wildly up and down, while everything else around it was still.  Why was it moving?  Had a deer just stepped on it and then disappeared into the spruce brush?  Or had a hare or red squirrel jumped on it?  Nothing seemed to be moving in the woods on either side, so I crept forward.  Then it moved again!  What the heck?  When I got closer I saw that it was a little balsam fir seedling that had had some snow on it, and in the warmer rain the snow was actively falling off of its little branches and causing them to bounce up and down as they were released from that burden.  False alarm! 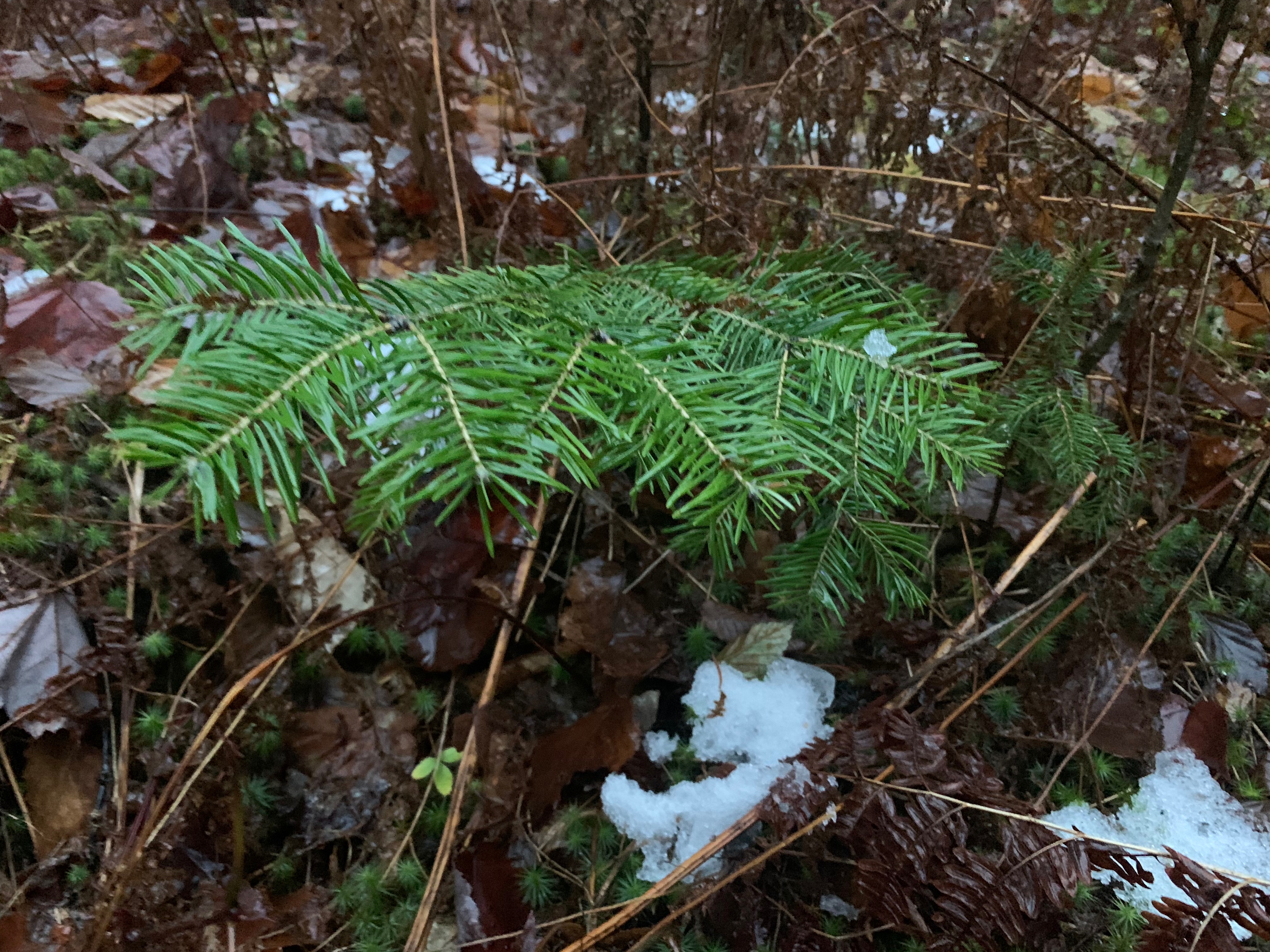 Up in the spruce maze there was a bit of intact snow cover, and there were tracks in it!  Aha! 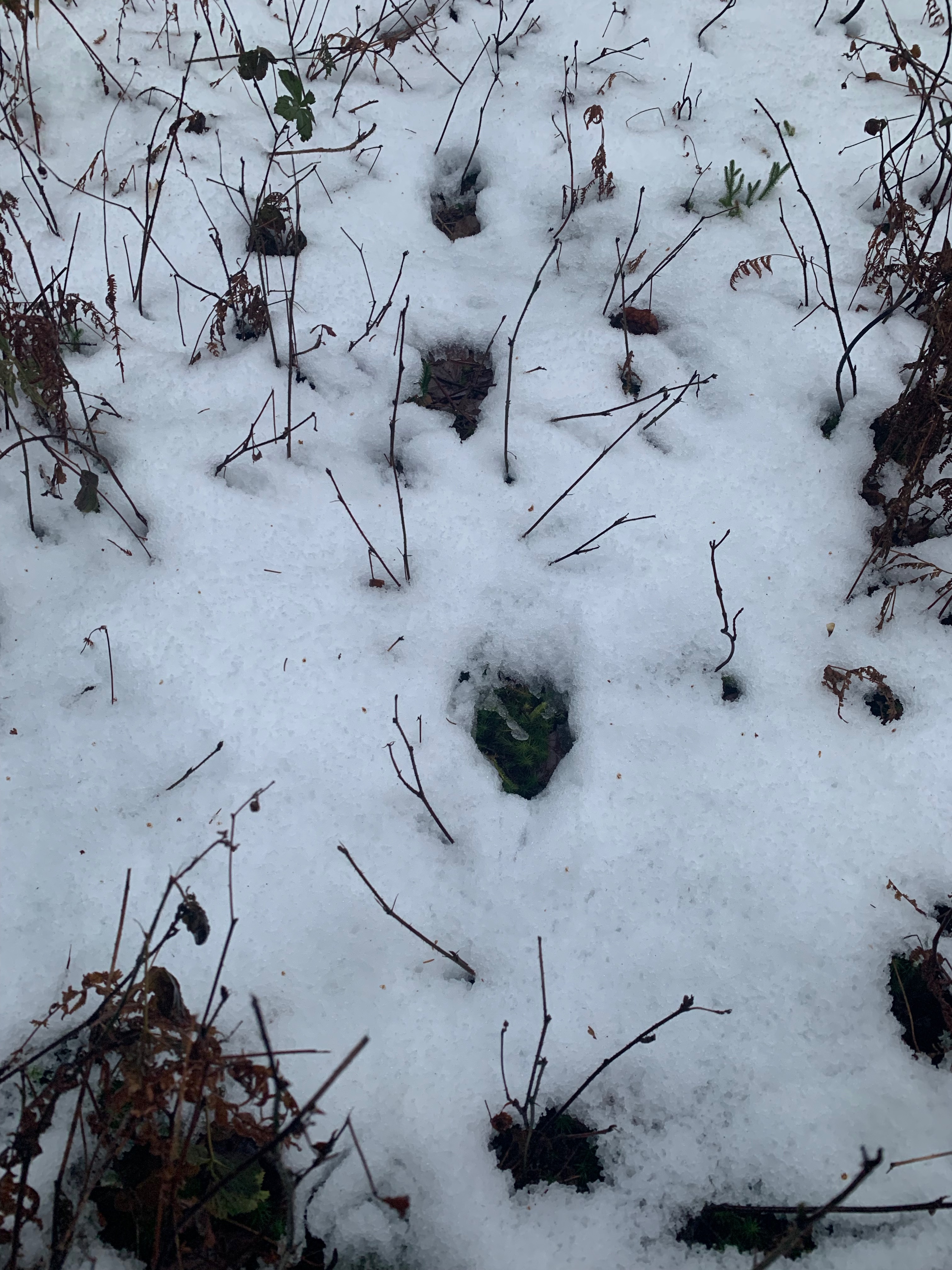 The tracks themselves were very melted out, but they could plausibly be deer tracks.  They could also be coyote.  They seemed to have the classic heart-shape of deer tracks, but when they are this melted out, its very hard to tell.  I back-tracked the trail into the woods beyond the spruce maze, and they led me to a scrape under a larger spruce tree -- the first scrape I've found up this trail, all the rest have been down in Scrapesville or by the meadows. 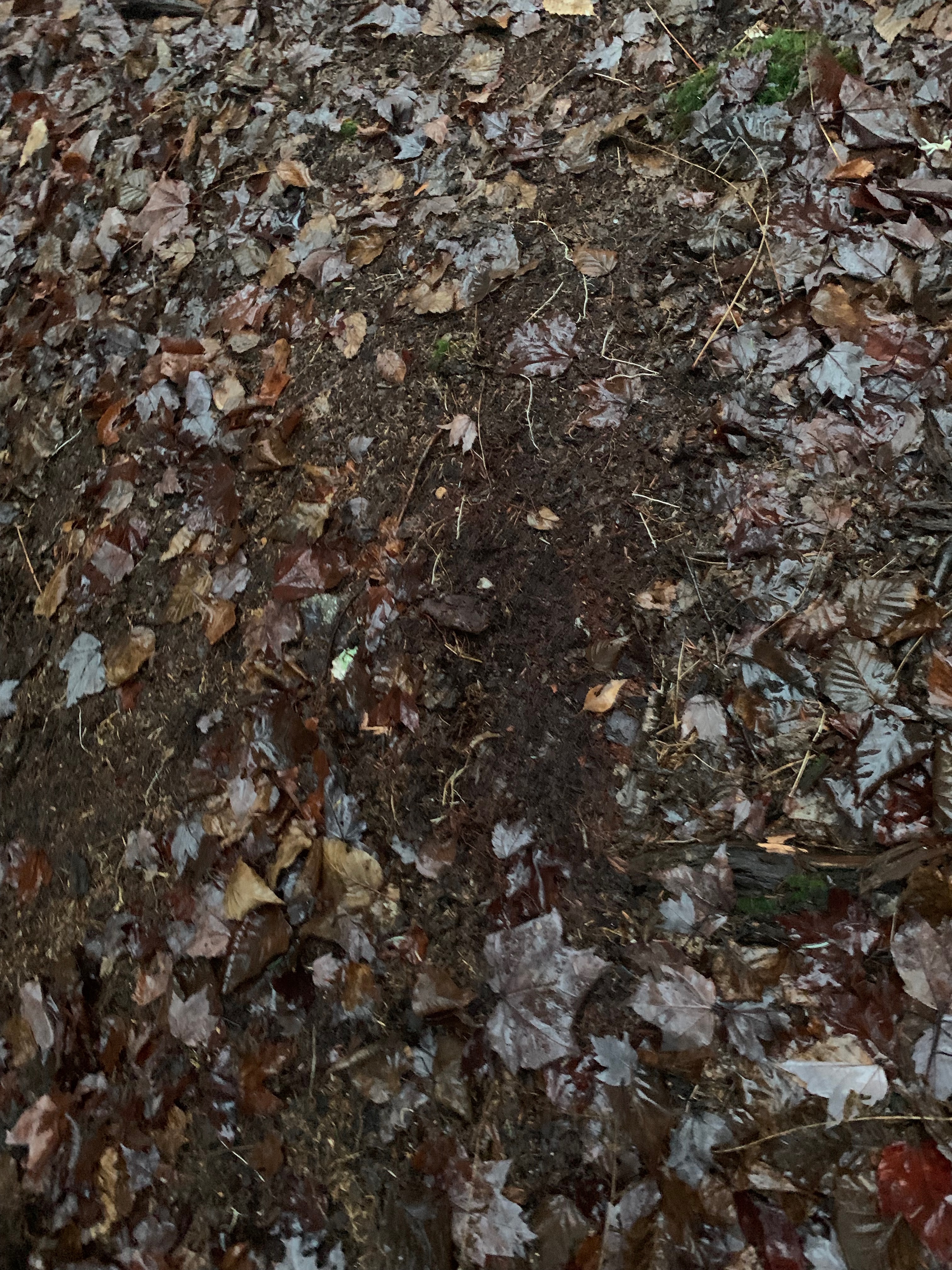 So perhaps it *is* a deer track, but it could still be something else.  I pushed on a little further into the woods, following an uncertain trail of compressions in the wet leaves.  But the sky was darkening early in this heavy rainstorm, and I soon decided I had better turn back.  It was less than five minutes after sunset that I started questioning whether there was enough light for reasonable target identification:  a dark evening indeed.  I walked back to my car and headed home, quite soaked with rain and sweat, but happy that I'd seen some sign and gotten some more confirmation of my theories about the spruce maze as a place that would attract deer.

Tomorrow I work a 14.5-hour day, then Saturday through Monday will finish out my hunting days for this season.  I find it kind of hilarious that *this* is the year I finally managed to blog my hunt (which I always think about doing), since I'm not hunting nearly as hard as I do some years.  In the past I'd be spending 13 hours hiking huge loops across the mountainside, or getting up at 4am to drive across three towns and sit in a tree stand before dawn when it is three degrees below zero.  But perhaps it makes sense... I didn't have the energy left to blog in the evenings those years!

I tried and failed to schedule a dogsitter for Clyde this weekend, so it'll still be morning and evening hunts for me.  Yet, despite a few less hours spent in the woods, I'm really enjoying hunting this year: drilling down deep on one piece of hillside, a place that I have been walking and skiing regularly for the past 10 months.  It feels like a slower waltz of relationship with this land, without too much urgency.  Maybe, with all the drama of the pandemic, I have less to prove this year.  In a time of plague, living well, resting when I need to, and leaning into whatever impulse will make each moment of the hunt a little sweeter feels like a good way to arrange my priorities.