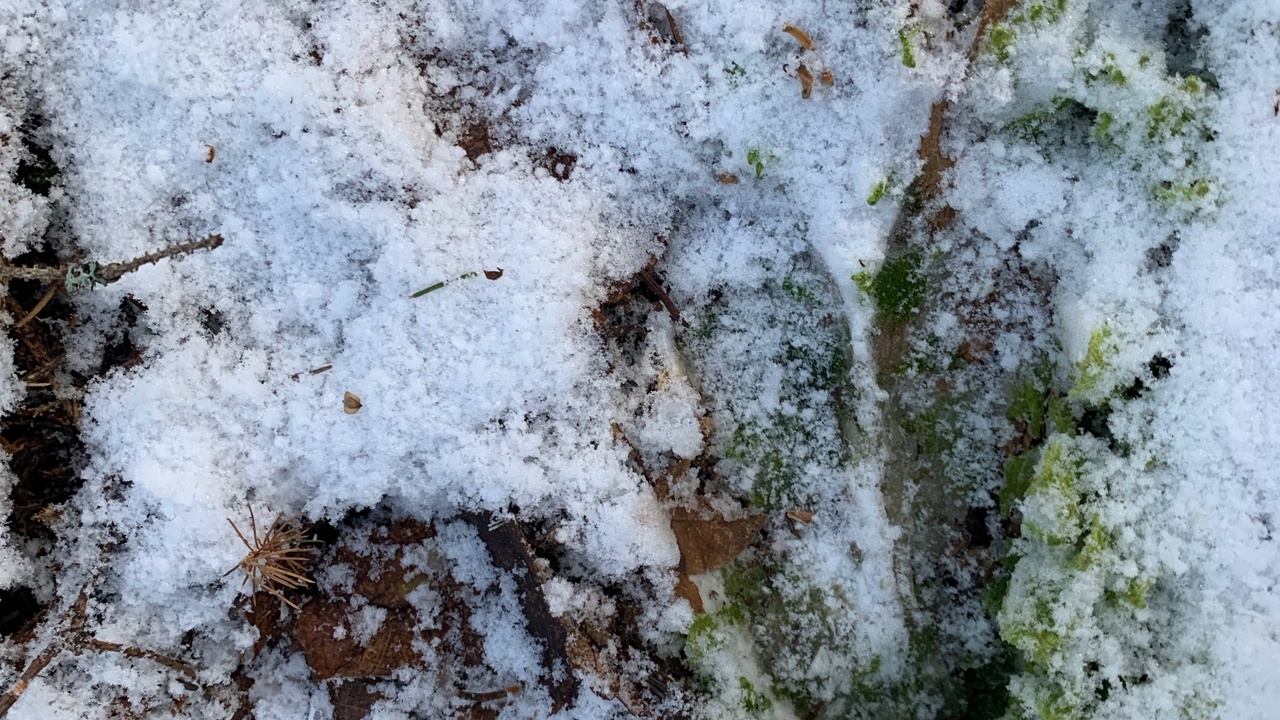 Weather: clear sky, no wind besides the dawn and dusk thermals

In an interesting turn of events, I got a lot of rest yesterday, since I woke up with significant vertigo and had to call in sick to work at 6am.  Vertigo is a rare side effect of the Moderna vaccine and my doc says it should clear up within a week.  Happily, I'll get special Covid sick-pay from my company to cover my lost wages, and I am subsequently well-rested enough to get out early this morning (no vertigo today). 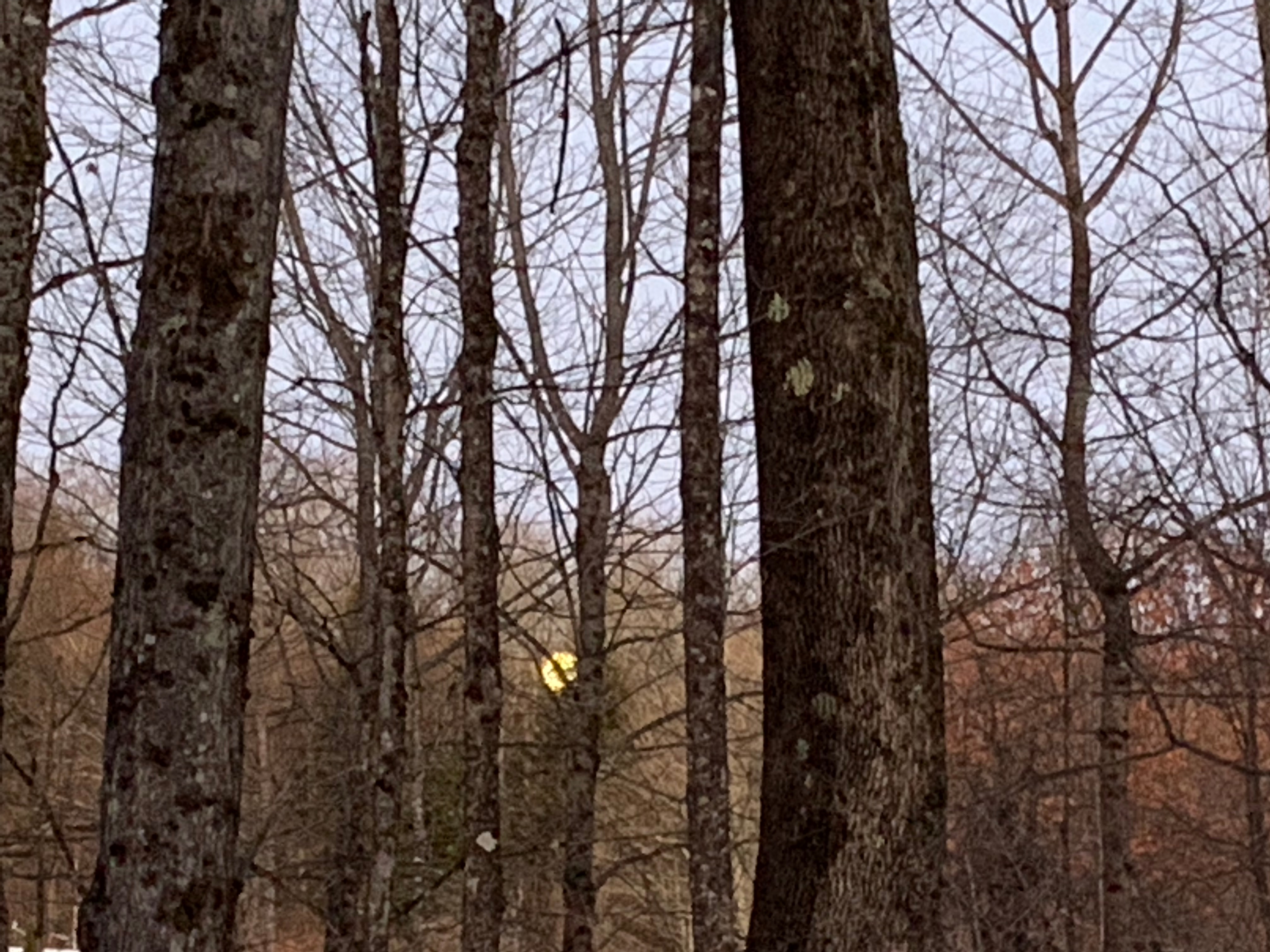 It was clear this morning!  No rain, not a cloud in the sky, just a rosy blush in the east and the nearly-full moon setting in the arms of a maple tree in the west.  Stunning, especially over the thin powder of new snow.  I sat at the bottom of the field near some apple trees (same places as Monday night) and was in place 15 minutes before dawn.  I usually try to be in place a full hour before dawn, so that the forest has 30 minutes to settle before First Legal Shot.  But I am moving slow this year.

About 15 minutes after dawn, somebody drove through the forest road above me in their growly truck.  Seriously, guys?  Now the deer are sure not to come to this spot.  Thanks a lot.  Jeez, I thought *I* was slow today, but look at these slug-a-beds.  The truck drove out to the very end of the main trail, something I have been tempted to do but sternly resisted because I don't want to disturb the deer out there and risk them changing their patterns in response to a rare vehicle incursion.  Sigh.  This is what you have to put up with if you hunt on public-access land.

I sat a bit longer just the same, since stomping around the woods on crunchy frozen leaves seemed like an even worse way to spend the Golden Hour than sitting by a field that just had a truck go by.  At least here I would be quiet.  Gradually I noticed that there *is* a tree-stand in this field corner after all, high on a maple tree, just a little hang-on model (not the ladder stand that was here in bow season).  When I broke my sit I went over to it:  the support chain has begun to grow into the bark of the tree, and the ascent is via screw-in pegs on the trunk.  Friends: please take down your tree stands at the end of the season so that they don't slowly girdle and kill the growing tree, and use strap-on steps or climbing sticks so that you don't hurt the tree with screw-in pegs.  Even better: use a ladder stand, which is safer anyway.  Poor tree!  This kind of thing gives hunters a bad name, and is completely unnecessary.

Not sure where to head next, I walked down towards a little swampy meadow I'd glimpsed on Monday's hunt.  It was a lovely sunny space, marshy underfoot, filled with sphagnum moss, horsetail, goldenrod, asters, cattails, willow shrubs, and wild spirea (commonly known as hardhack). 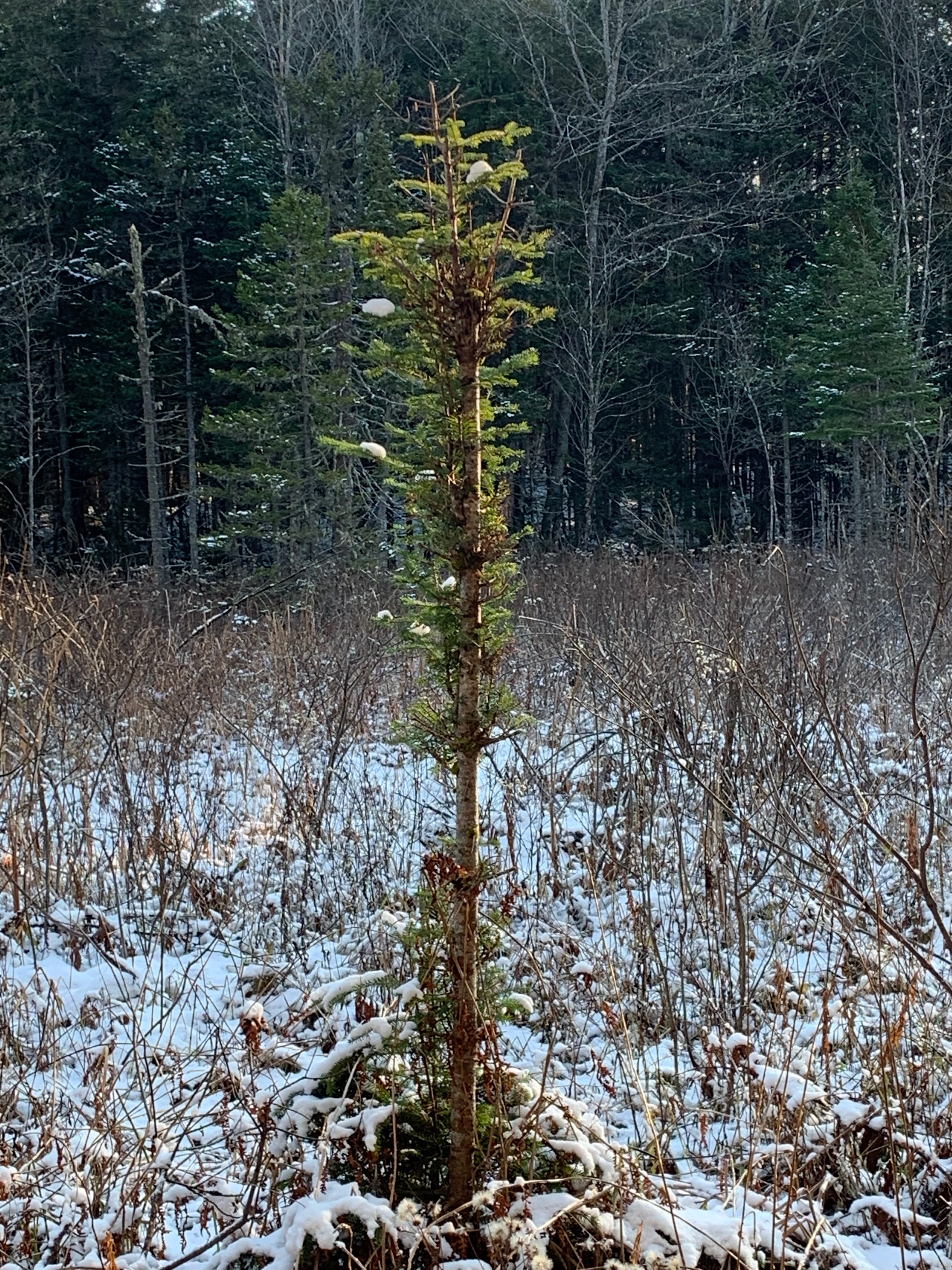 Deer and moose love this kind of naturally occurring meadow, as confirmed by this very heavily browsed balsam fir tree.

I continued towards Scrapesville, and then I found a track! 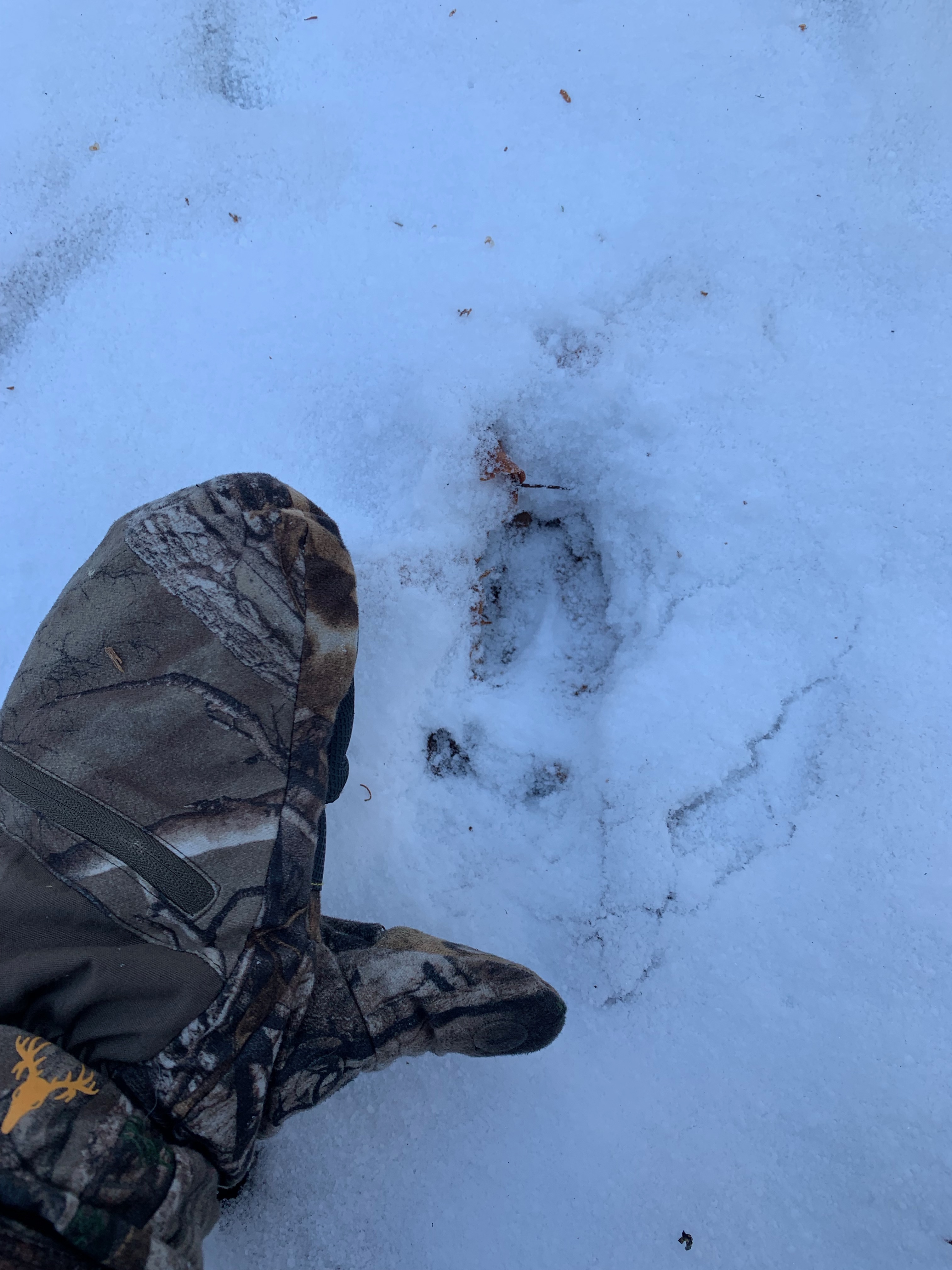 A fresh deer track to follow is one of my favorite things!  The track was not huge, so it might not be a legal buck, but following any deer track teaches me loads about how deer are using this landscape.  I turned downhill and the trail led me to some brushy balsam firs:  ideal deer bedding territory. 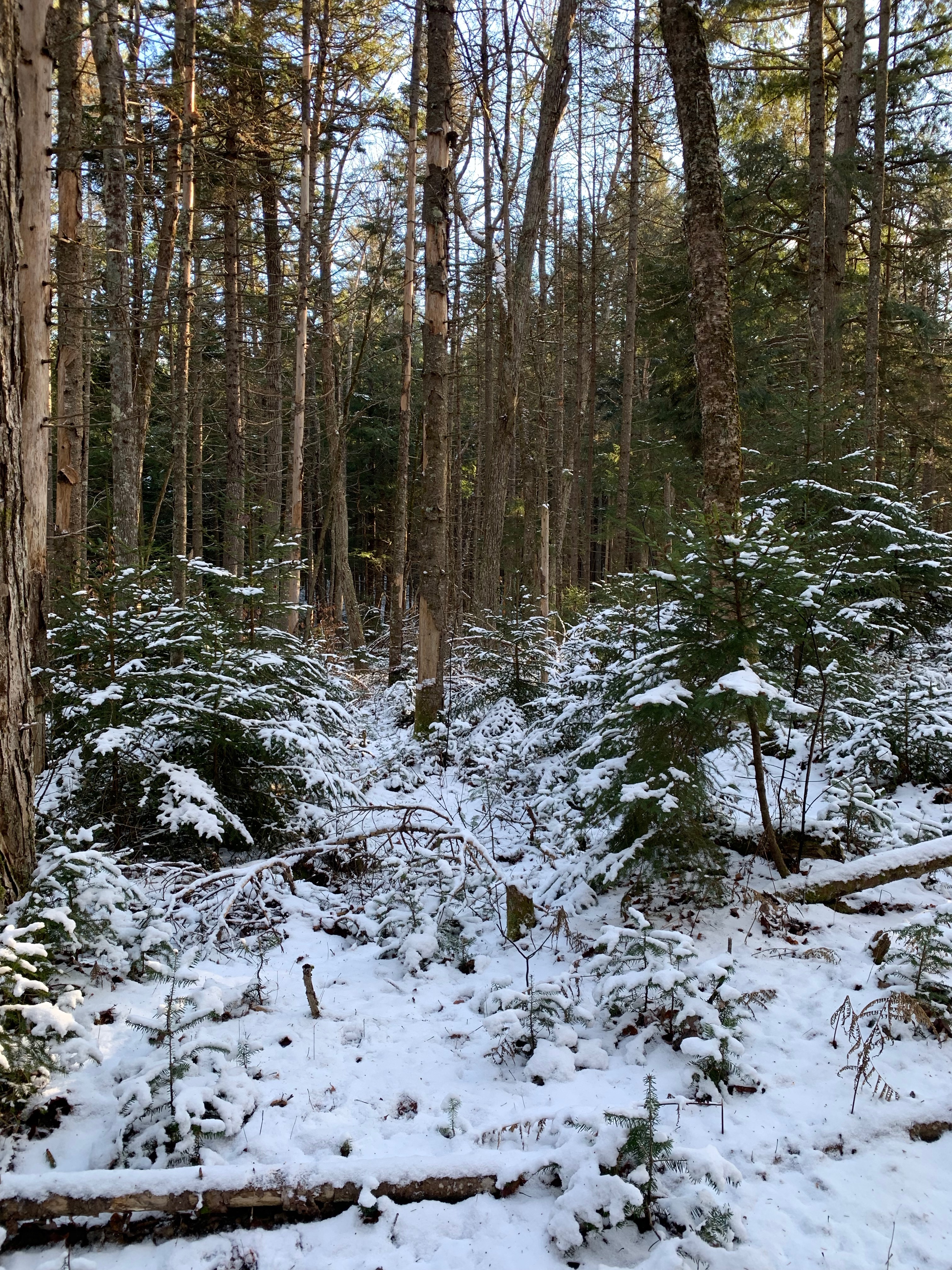 Just beyond these shrubby firs, the deer track crossed both another deer track and a coyote track.  In these conditions, deer can usually evade coyotes.  It isn't until they are weakened by a long winter and hobbled by very deep snow that the coyotes will hunt them easily. 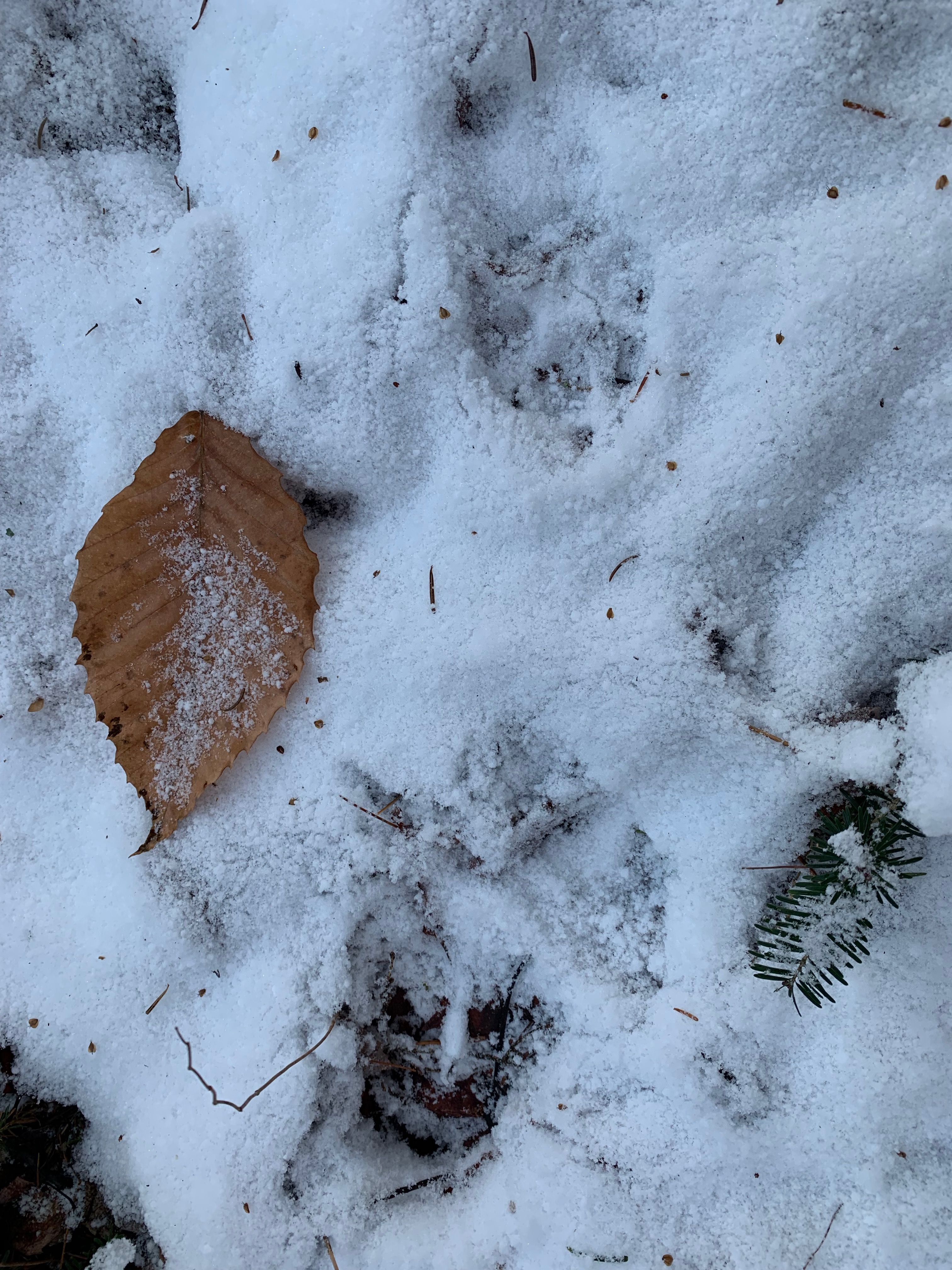 I kept following the original track, which led into a tall dark cathedral of spruce, fir, and hemlock: a deer yard!  Deer congregate in these evergreen groves in deep winter, where the snow is a tiny bit shallower than other parts of the forest.  I named this one the "Lower Yard" in my head, since it is below the main access trail.  I found that my little deer was taking the same path as another deer whose tracks pointed in the opposite direction -- but the other deer was MUCH bigger!  A bit of moist green sphagnum moss held such a big beautiful print that I gasped when I saw it. 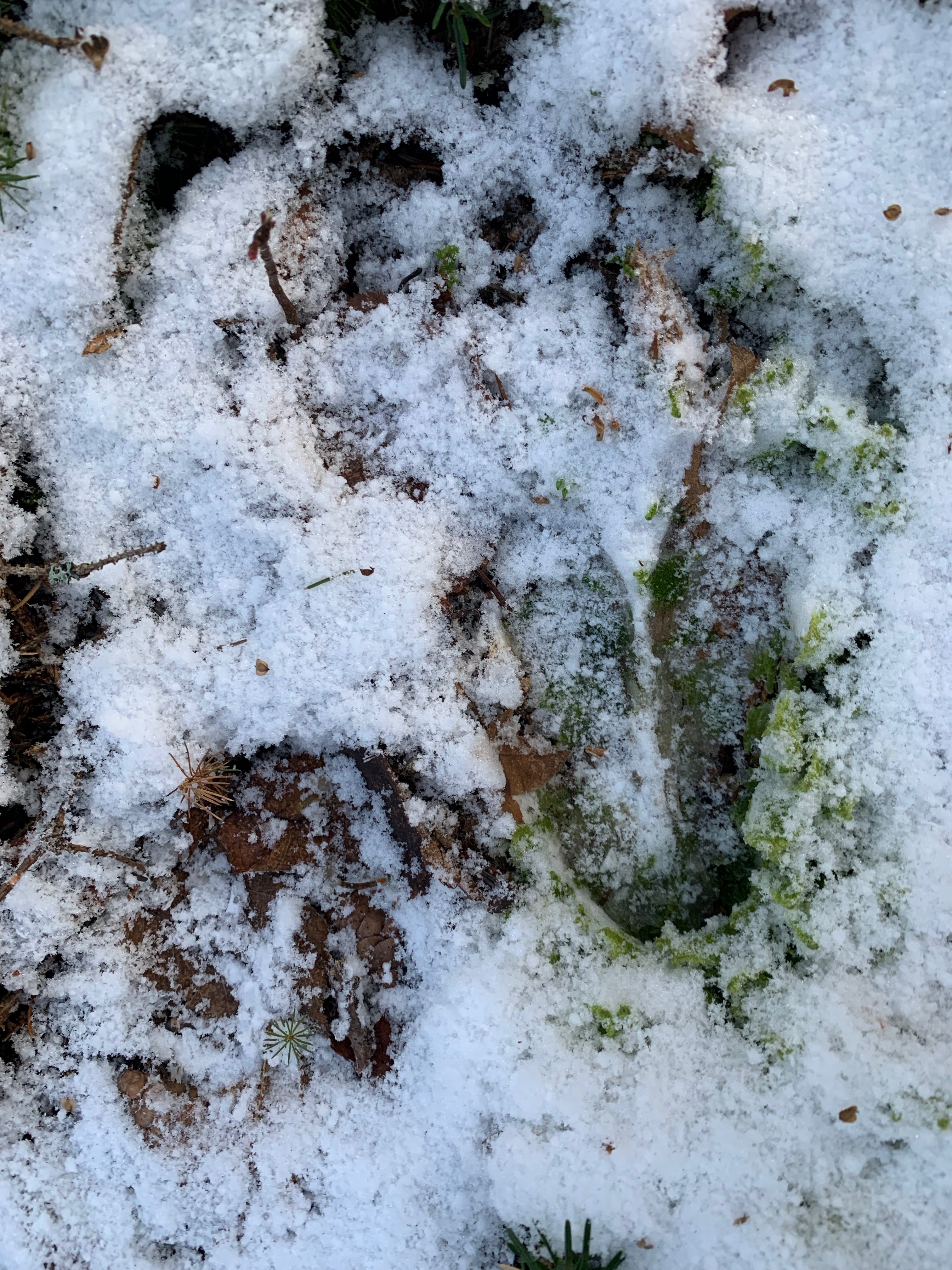 I tried to turn around and follow the big tracks, but could not locate the spot where they broke off from the smaller trail,  so I turned back downhill and backtracked it, hoping this would lead me to the big deer's bed.  The big deer -- perhaps a buck -- had such a long stride!  I named him "Longstrider" in my head.  I followed his trail backwards all through the Lower Yard and out the other side, but the sun was getting high so I turned back uphill, knowing I had to get home soon.  This time I was able to find the place where Longstrider's trail veered off from the little deer's path!  He went along sidehill, crossed a small stream, and leapt up the steep bank on the other side in five big beautiful bounds.  His tracks were clearly headed towards Scrapesville, which did not surprise me at all.  The rut is really getting underway now, and Scrapesville is clearly the place a big buck like him can meet all the babes.  Of course, Longstrider could also be a really big doe -- I've seen some huge ones out here -- but no matter their sex, Scrapesville is where the rut matchmaking is happening.

If I was not a dog parent I would have followed that track all day, but it was already after 10am and I was still a good hike away from my car.  I reluctantly turned back to the main trail.

There I found the truck tracks from this morning (the truck had already left), and the boot-prints of two men (guessing their gender by their boot size), one with Sorrell boots and another with a less distinctive boot-print.  They had headed up the path toward the Spruce Maze, and then looped back across the hillside to the main trail and back to their truck.  Why so brief a hunt?  Perhaps they are buck trackers, in the style of some of Vermont's most famous hunting families (the Benoits, the Elmers), cruising through looking for a large buck track to follow and moving on if they don't find one quickly.  This style of tracking is a form of persistence hunting that requires a huge amount of stamina, but the fact that they start their days tootling around in a pickup truck makes it a little less glamorous!

You can read all about this style of hunting in Larry Benoit's book How to Bag the Biggest Buck of Your Life, but be forewarned: it took me three different tries to get through it, because I kept getting fed up with all the sexist metaphors and throwing the damn book across the room.  But there is some useful information in there if you can stomach his prose.

I'm glad these men didn't find Longstrider, although I'm sad I can't stay and track him all day myself!  I got home by 11am.  Clyde showed a great deal of clemency for this late return by merely re-arranging some of my belongings, and not destroying a single one.  I guess he appreciated how much peanut butter I stuffed inside his Kong at 6am. 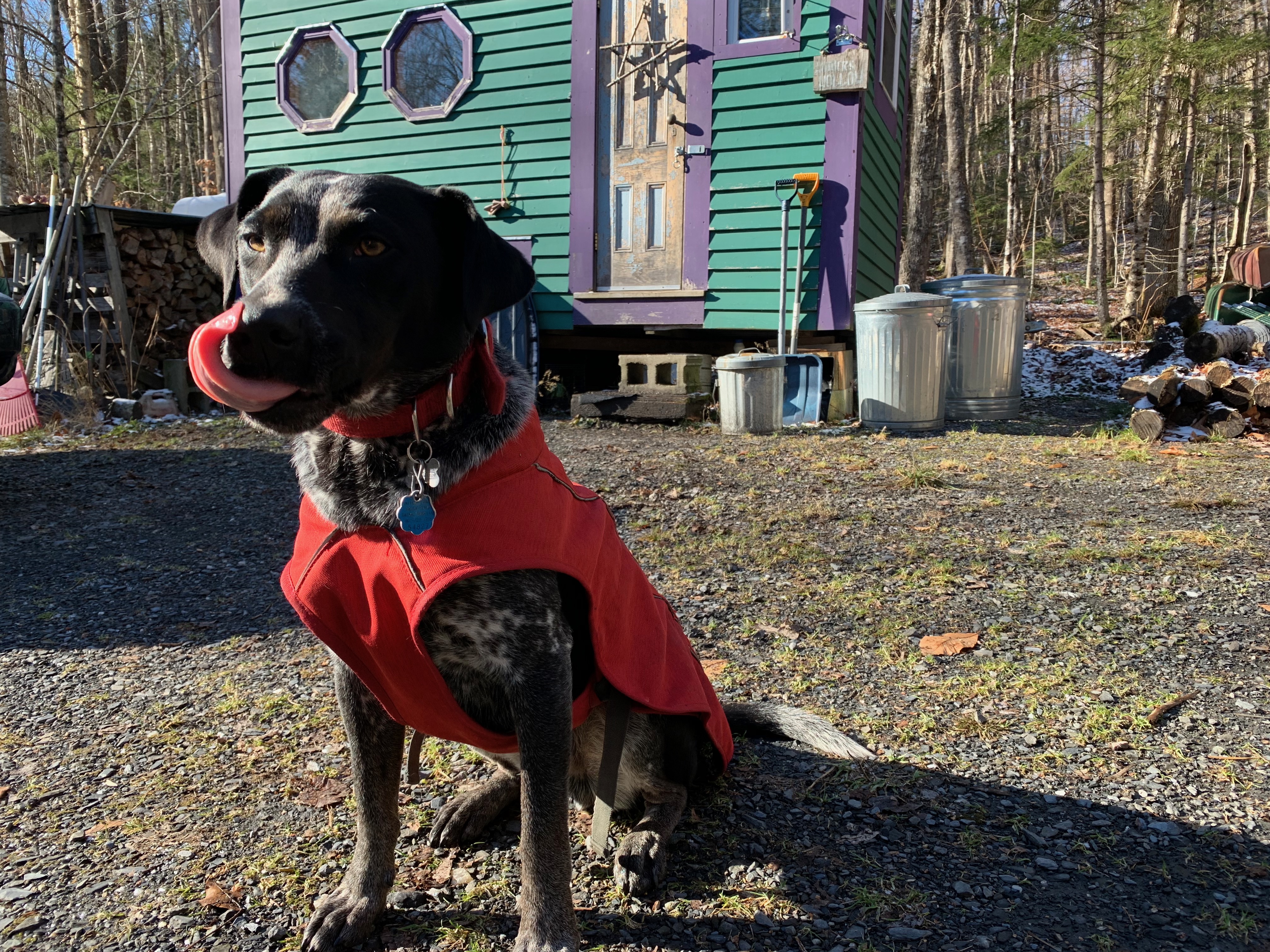 In the afternoon, I considered hunting near my home, since my landmate Matt (what was my mentee for Novice Season in 2020) saw a doe trailed by a buck in front of his nearby ground-blind near sunset yesterday evening.  He could take the blind and I could get up in my climbing tree stand and we'd have a lot of the area covered between us.  But... its somewhat likely that the buck has already bred that doe by now, and Scrapesville seems to have more than one buck (or one VERY scrape-obsessed buck) so I'll probably have better chances over there.  Still, Matt has disproven my theory that the deer never cross my land in daylight, and that is an exciting piece of information.  The rut always shakes things up!

Walking out the main trail towards Scrapesville, I encountered my neighbor in a pickup truck with his friend.  This neighbor is an incredible hunter who's been hunting this hillside for many decades, and he's graciously allowed me to join the fray, which I very much appreciate.  I leapt at the opportunity to exchange some hunting gossip.  He showed me a picture of the 8-pointer that our other neighbor had shot last week, and the 175-pound black bear that he had harvested himself.  He said he has five bears on his game cameras, so there are plenty left for all.  We wished each other good hunting.  I doubt he will ever tell me his local secrets, but I like him just for accepting me: his upstart queer hunting neighbor. 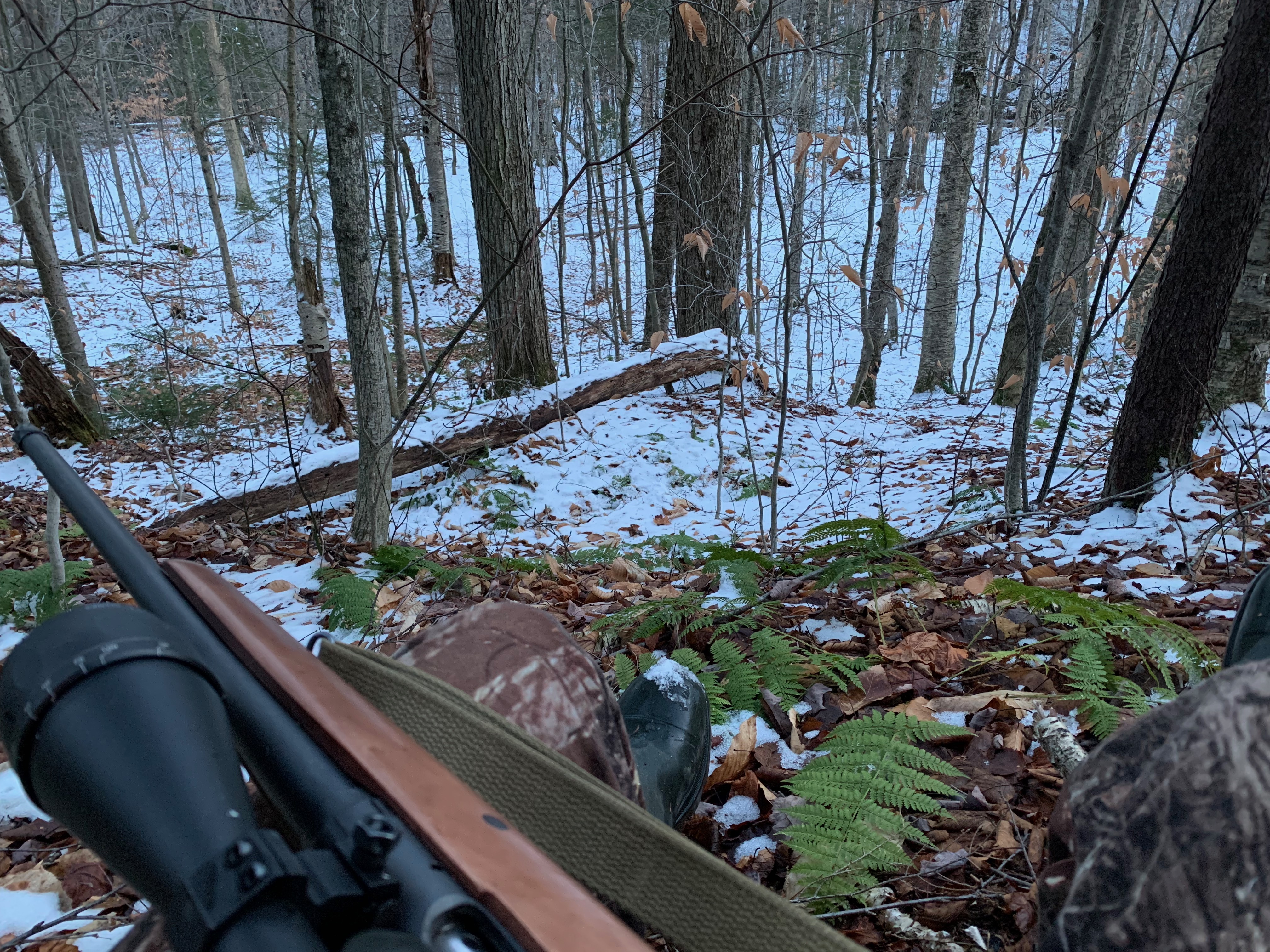 I found a place to sit over a wide curve of the Scrapesville logging road, and got settled in and still an hour before sunset.  Slowly the forest all around me began to dim.  I sounded my doe bleat call around sunset, but the noise from the nearby brook was so loud that no buck would have been able to hear it unless they were already very close.  I saw no deer, even though I sat still & silent until Last Legal Shot.  On my walk back out, the patchy snow reflected the silvery sky so well that I only had to turn on my headlamp to see my footing for the stream crossings.

Tomorrow is my next-to-last day of deer hunting (and also the last day of bear season).  I hope I can use it well.