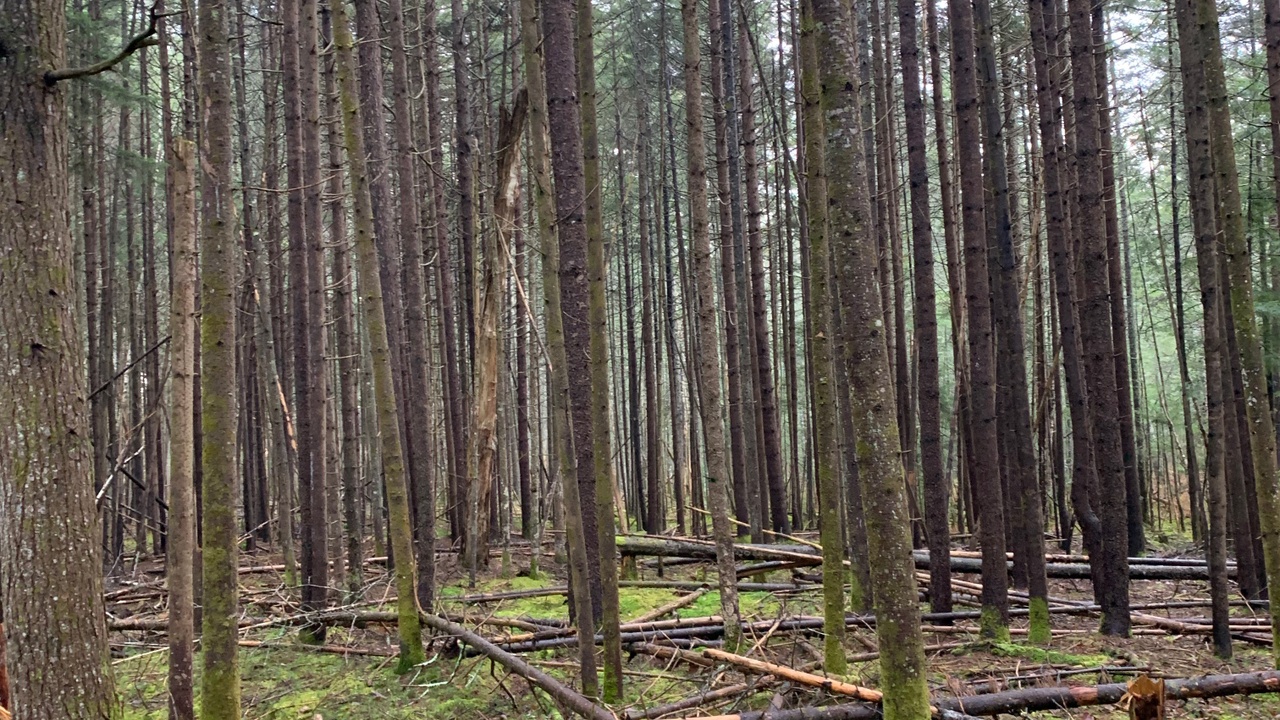 As I walked into the hunting grounds, the forest was filled with a thick gray mist.  Daylight would come later in than usual in this fog.  I crept down hill to a spot that I hoped was a little above the fresh scrape I'd found yesterday.  My hunting mentor always said that 90% of the time bucks check their scrapes in the dark, but peak rut will sometimes disturb their patterns, and I came armed with my doe bleat call.  Maybe if they thought a doe was around they'd come to this area in daylight!

I sat for almost two hours, using my call every 15 minutes or so, but didn't see a deer.  At one point I got fidgety and got up to find a better spot to sit, and realized that I was indeed exactly where I'd wanted to put myself: right above the fresh scrape and a nearby fir thicket.  I'm always kind of surprised when I find my way to one exact spot in the woods, off-trail and in the dark without a headlamp, but it happens a lot.  I'm learning the contours of this hillside well, and that feels good.

After my sit I wanted to explore the beautiful Lower Yard one more time. 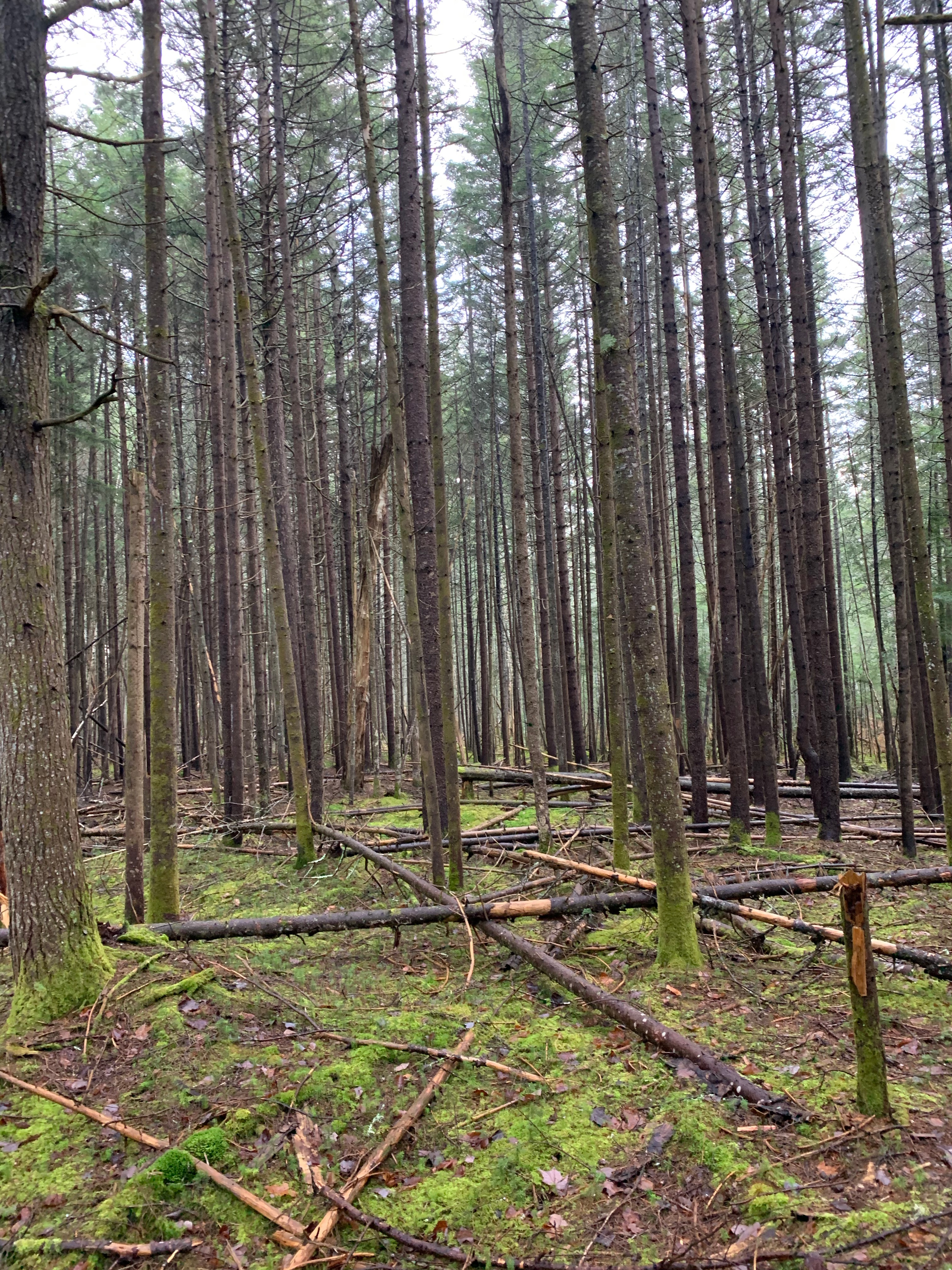 This deer yard is even more beautiful now that the snow has melted, because the green mossy carpet glows like a jewel in the slanted morning light.  I found that the trail both the little deer and Longstrider were walking two days ago is actually a well-worn game trail through the grove.  I followed it for a while, and then saw something I've never seen before:  two large chunks of chaga just lying in the moss at the base of a birch tree.  You could clearly see where they'd detached from a larger chaga growth, but I've never seen chaga just fall off the tree -- usually it has to be removed with an ax. 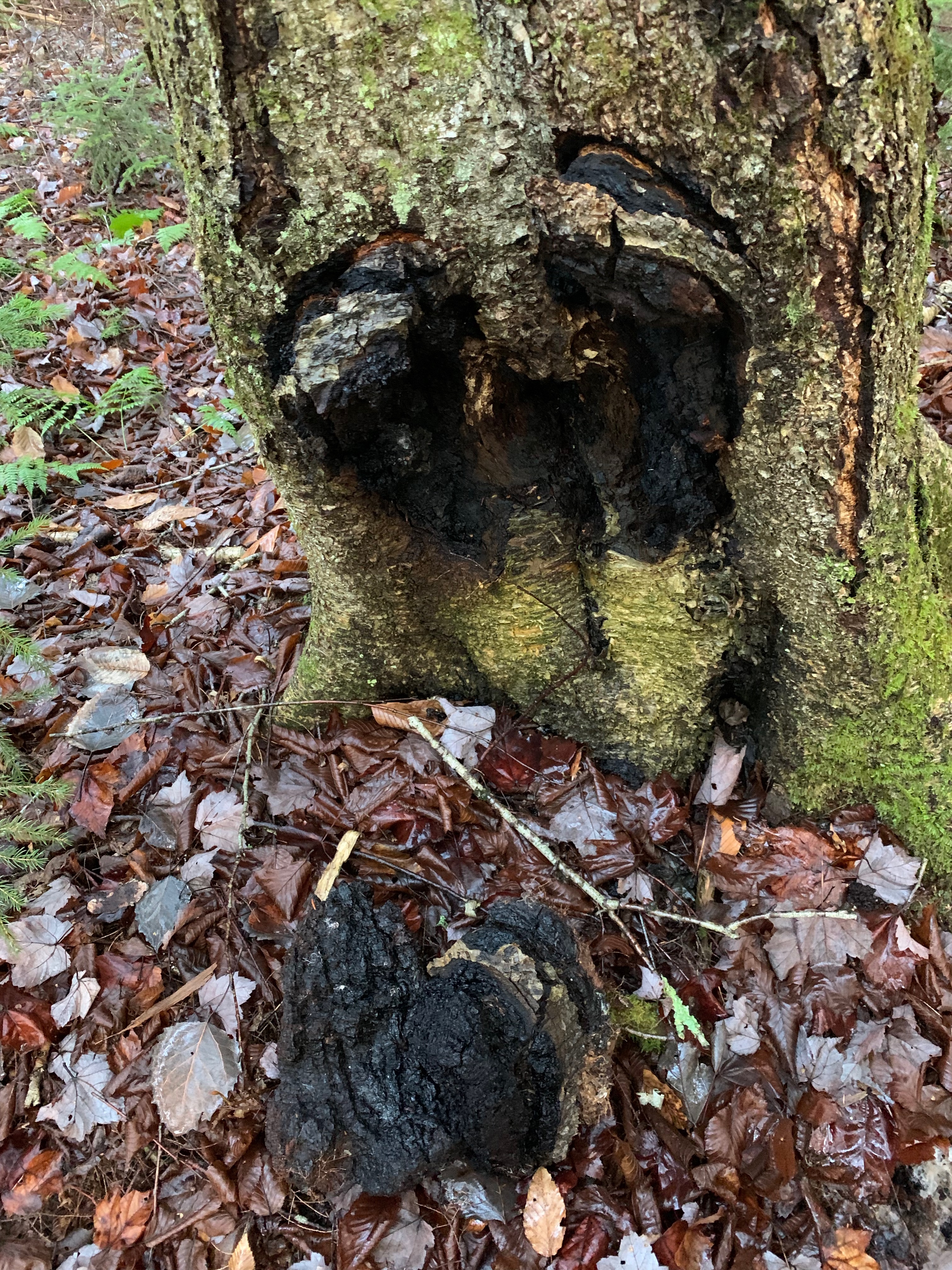 Chaga is a wild woody healing mushroom that makes a delicious dark tea.  It is an adaptogen, increases physical stamina, boosts the immune system, and has anti-cancer properties.  This northern mushroom grows very slowly (the growth I found is probably older than I am) so it is easy to over-harvest chaga.  I harvest it only very sparingly, in places where it is locally abundant, and always at least 200 yards from a public trail.  I see a lot of it when I am deer hunting, but I usually resist taking any home. 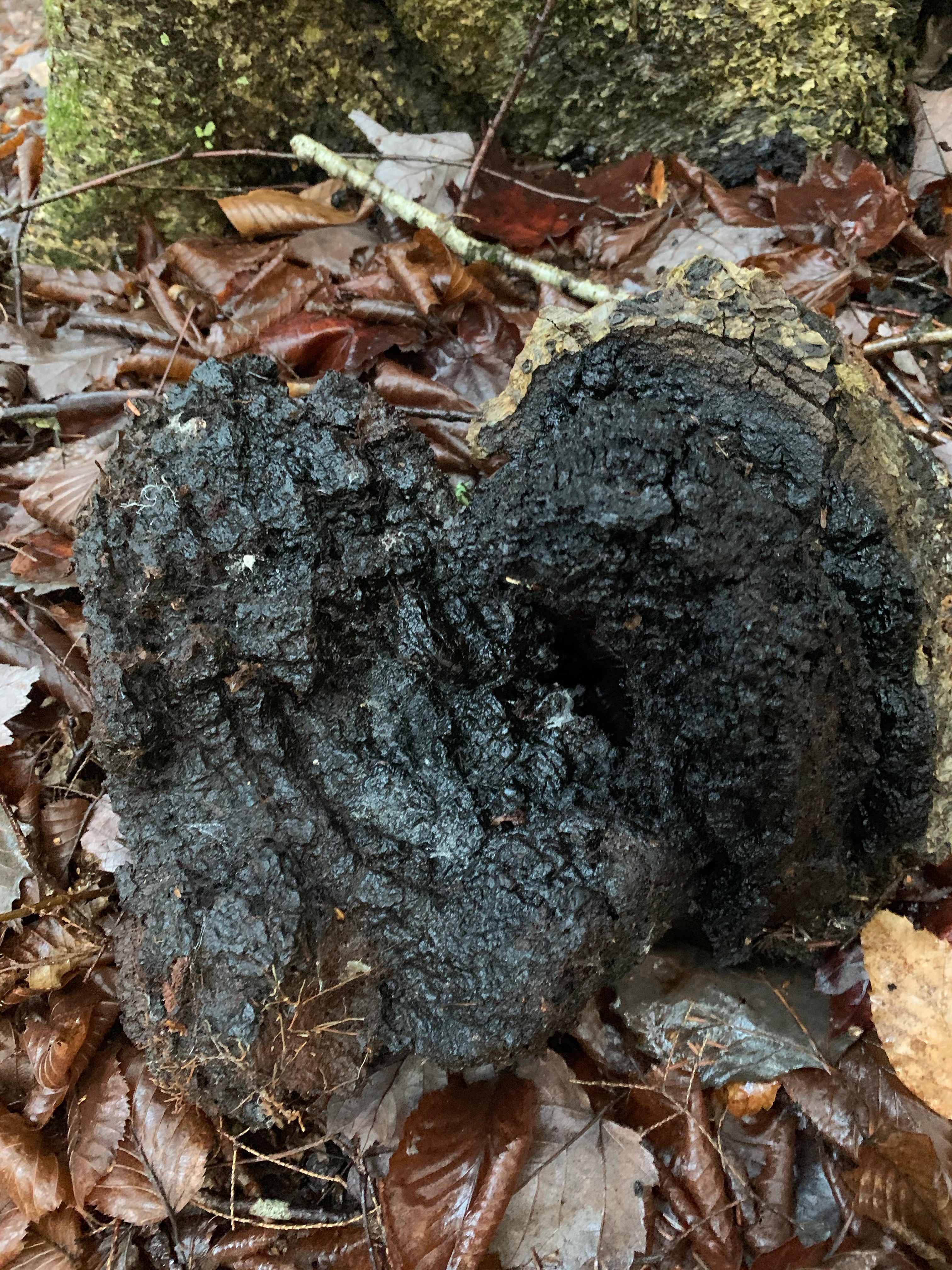 But here was this chaga, lying right at my feet, already separated from the tree!  I could take it home with no guilt about destroying a 50-year-old mushroom, since it can't live long without the birch host to feed upon.  I felt that the forest was offering me a harvest: not the buck that I had been looking for, but an acknowledgement of how carefully I've been studying and appreciating this bit of land for the past week.

I put the two big chaga chunks in my daypack, and walked over to the nearby brook that fills the grove with its music.  I realized that I had forgotten my pouch of offering herbs (I hung it up to dry after a rainy hunt and hadn't put it back in my pocket).  I pulled out a silver coin instead.  My European ancestors have been offering coins and other worked metal to their sacred spaces since prehistory, so I reach past the ills of modern capitalism and grasp at that older meaning.  Here on Abenaki land, among the Deer People who are all around me (but always just out of sight), I offered my prayers of thanks for a good hunt.  I tossed the coin into the brook. 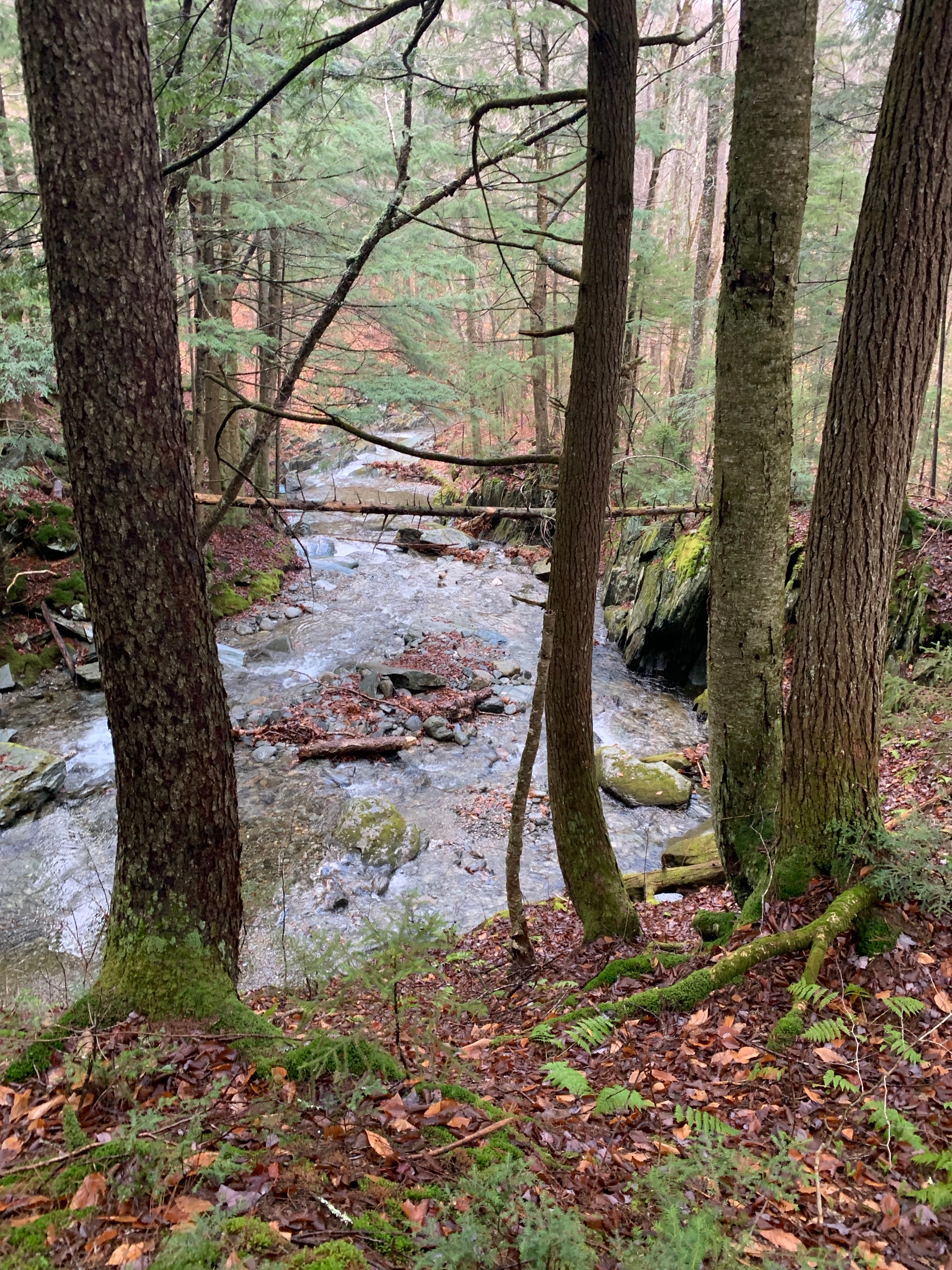 Walking out of the forest, I felt satisfied with how I'd spent my hunting days this rifle season.  I'd discovered whole new realms of this forest, and found clear signs of how the deer are inhabiting the space.  Maybe this winter I'll re-read Bowhunting Forests & Big Woods by Greg Miller, or check out Hal Blood's Hunting Big Woods Bucks.  The first time I read Miller's book I didn't have enough dirt-time in the woods during rut to take in all he has to say, but the thing I remember most was his advice to expect to scout & hunt a particular spot hard for at least 5 years before you can even begin to have success.

I won't be back to this hillside with my rifle this year.  If I hunt this evening, it will be on my own land.  This is partly because I don't have time for a long drag out this evening or tomorrow, and partly because this land has already given me such a clear nourishing gift.  I now have chaga for the winter, and my freezer is still mostly full with the meat of the roadkill doe I salvaged back in August.  That is more than enough.